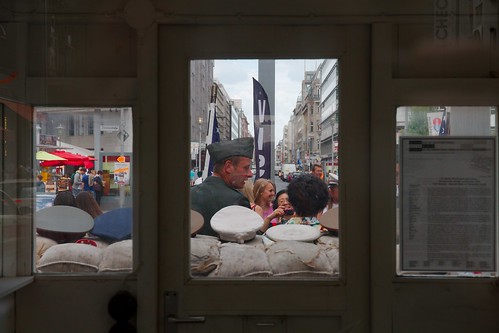 Summer holiday 2014
In and around Berlin Germany

From Wikipedia, the free encyclopedia


This article is about the capital of Germany. For other uses, see Berlin (disambiguation).

Berlin (/bərˈlɪn/; German pronunciation: [bɛɐ̯ˈliːn] ( listen)) is the capital of Germany and one of the 16 states of Germany. With a population of 3.5 million people,[4] Berlin is Germany's largest city. It is the second most populous city proper and the seventh most populous urban area in the European Union.[5] Located in northeastern Germany on the River Spree, it is the center of the Berlin-Brandenburg Metropolitan Region, which has about 4.5 million residents from over 180 nations.[6][7][8][9] Due to its location in the European Plain, Berlin is influenced by a temperate seasonal climate. Around one third of the city's area is composed of forests, parks, gardens, rivers and lakes.[10]

Berlin is a world city of culture, politics, media, and science.[15][16][17][18] Its economy is based on high-tech firms and the service sector, encompassing a diverse range of creative industries, research facilities, media corporations, and convention venues.[19][20] Berlin serves as a continental hub for air and rail traffic and has a highly complex public transportation network. The metropolis is a popular tourist destination.[21] Significant industries also include IT, pharmaceuticals, biomedical engineering, clean tech, biotechnology, construction, and electronics.

Modern Berlin is home to renowned universities, orchestras, museums, entertainment venues, and is host to many sporting events.[22] Its urban setting has made it a sought-after location for international film productions.[23] The city is well known for its festivals, diverse architecture, nightlife, contemporary arts, and a high quality of living.[24] Over the last decade Berlin has seen the upcoming of a cosmopolitan entrepreneurial scene.[25]

Street, Berlin (1913) by Ernst Ludwig Kirchner
After 1910 Berlin had become a fertile ground for the German Expressionist movement. In fields such as architecture, painting and cinema new forms of artistic styles were invented. At the end of World War I in 1918, a republic was proclaimed by Philipp Scheidemann at the Reichstag building. In 1920, the Greater Berlin Act incorporated dozens of suburban cities, villages, and estates around Berlin into an expanded city. The act increased the area of Berlin from 66 to 883 km2 (25 to 341 sq mi). The population almost doubled and Berlin had a population of around four million. During the Weimar era, Berlin underwent political unrest due to economic uncertainties, but also became a renowned center of the Roaring Twenties. The metropolis experienced its heyday as a major world capital and was known for its leadership roles in science, the humanities, city planning, film, higher education, government, and industries. Albert Einstein rose to public prominence during his years in Berlin, being awarded the Nobel Prize for Physics in 1921.

Berlin in ruins after World War II (Potsdamer Platz, 1945).
In 1933, Adolf Hitler and the Nazi Party came to power. NSDAP rule effectively destroyed Berlin's Jewish community, which had numbered 160,000, representing one-third of all Jews in the country. Berlin's Jewish population fell to about 80,000 as a result of emigration between 1933 and 1939. After Kristallnacht in 1938, thousands of the city's persecuted groups were imprisoned in the nearby Sachsenhausen concentration camp or, starting in early 1943, were shipped to death camps, such as Auschwitz.[39] During World War II, large parts of Berlin were destroyed in the 1943–45 air raids and during the Battle of Berlin. Around 125,000 civilians were killed.[40] After the end of the war in Europe in 1945, Berlin received large numbers of refugees from the Eastern provinces. The victorious powers divided the city into four sectors, analogous to the occupation zones into which Germany was divided. The sectors of the Western Allies (the United States, the United Kingdom and France) formed West Berlin, while the Soviet sector formed East Berlin.[41]

The Berlin Wall in 1986, painted on the western side. People crossing the so-called "death strip" on the eastern side were at risk of being shot.
All four Allies shared administrative responsibilities for Berlin. However, in 1948, when the Western Allies extended the currency reform in the Western zones of Germany to the three western sectors of Berlin, the Soviet Union imposed a blockade on the access routes to and from West Berlin, which lay entirely inside Soviet-controlled territory. The Berlin airlift, conducted by the three western Allies, overcame this blockade by supplying food and other supplies to the city from June 1948 to May 1949.[42] In 1949, the Federal Republic of Germany was founded in West Germany and eventually included all of the American, British, and French zones, excluding those three countries' zones in Berlin, while the Marxist-Leninist German Democratic Republic was proclaimed in East Germany. West Berlin officially remained an occupied city, but it politically was aligned with the Federal Republic of Germany despite West Berlin's geographic isolation. Airline service to West Berlin was granted only to American, British, and French airlines.

The fall of the Berlin Wall on 9 November 1989. On 3 October 1990, the German reunification process was formally finished.
The founding of the two German states increased Cold War tensions. West Berlin was surrounded by East German territory, and East Germany proclaimed the Eastern part as its capital, a move that was not recognized by the western powers. East Berlin included most of the historic center of the city. The West German government established itself in Bonn.[43] In 1961, East Germany began the building of the Berlin Wall between East and West Berlin, and events escalated to a tank standoff at Checkpoint Charlie. West Berlin was now de facto a part of West Germany with a unique legal status, while East Berlin was de facto a part of East Germany. John F. Kennedy gave his "Ich bin ein Berliner" – speech in 1963 underlining the US support for the Western part of the city. Berlin was completely divided. Although it was possible for Westerners to pass from one to the other side through strictly controlled checkpoints, for most Easterners travel to West Berlin or West Germany prohibited. In 1971, a Four-Power agreement guaranteed access to and from West Berlin by car or train through East Germany.[44]

In 1989, with the end of the Cold War and pressure from the East German population, the Berlin Wall fell on 9 November and was subsequently mostly demolished. Today, the East Side Gallery preserves a large portion of the Wall. On 3 October 1990, the two parts of Germany were reunified as the Federal Republic of Germany, and Berlin again became the official German capital. In 1991, the German Parliament, the Bundestag, voted to move the seat of the (West) German capital from Bonn to Berlin, which was completed in 1999. Berlin's 2001 administrative reform merged several districts. The number of boroughs was reduced from 23 to twelve. In 2006 the FIFA World Cup Final was held in Berlin.