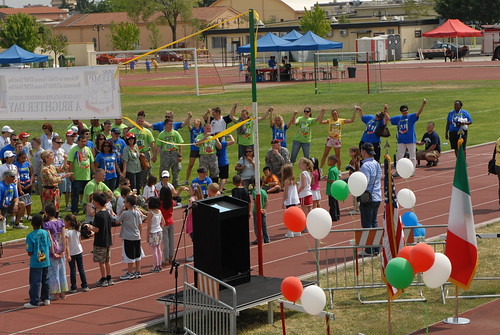 What do you get when you add Waka-Waka, 50-plus kids, 60-plus 173rd Airborne Division “Buddies,” and 190 Volunteers , throw-in a beautiful day then multiply all that by ‘a whole lotta fun?’ You guessed it – Vicenza’s first Exceptional Family Member Program Sports Day.

The event marks five months of a lot of hard work and coordination.

“I can go down a whole list of folks in the Garrison and in the community, but there are two people who made this day happen,” said Maj. Gen. David. R. Hogg, commander, USARAF. “Cara Tarr, the EFMP coordinator, and Loraine De Oliveira, the EFMP Sports Day Volunteer Coordinator, brought this day together after five months of planning -- so thumbs-up to them.

Tarr became emotional when asked what the day meant to her.

“To see the community come together in this way has been amazing,” De Oliveira said. “We have volunteers from US Army Africa, Army Community Service, Vicenza Garrison, Italian Volunteers, and our community have come out to participate in this event – it has been a privilege to be a part of this,” she said.

Francesca Gheller, EFMP Volunteer who works with Vicenza Housing, said the day has dual meanings for her.

“My son, Paul Dorrity, was born today,” Gheller said. “He was a pilot with 160th Special Operations Aviation Regiment and was killed in a mission in Afghanistan fighting the war against terrorism – so I come today in his memory because he loved track and field and to honor all these children participating today.”

“These Soldiers just got back from Afghanistan and are out here as ‘Airborne Buddies,’” Hogg said. “When you look at the work from the volunteers and the community to put this program together and have done an exceptional job – and it’s not just our American volunteers, it’s our Italian host nation community volunteering to be a part of this,” he said.

Activities continue through 3 p.m. today at the main track beside the Vicenza Army Medical Clinic.

To learn more about U.S. Army Africa visit our official website at www.usaraf.army.mil