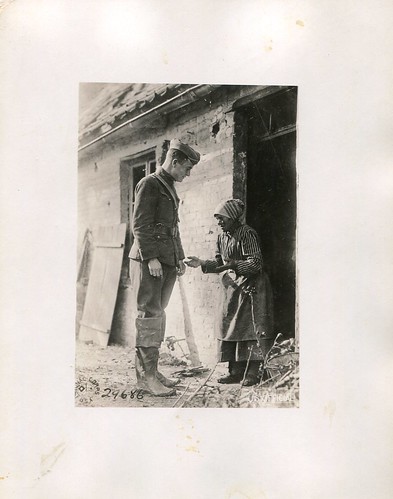 Madame Josephine Vassaux, a resident of Montbrehain, France, whose husband was killed by a shell thrown into the city just previous to its capture by the American troops on October 6, 1918. Her husband, CharlesVassaux, aged 80, had been confined to his bed for three years and the old lady refused to leave his bedside until the authorities had completed his burial arrangements—five days after his death. She is shown relating the incident to 1st Lieut. C. A. McDaniel of the 105th Field Signal Battalion (formerly Company A, North Carolina Signal Corps), 30th Division, at Montbrehain, France, on October 14, 1918 (October 14, 1918) [Photograph by: U.S. Army Signal Corps, #29686].