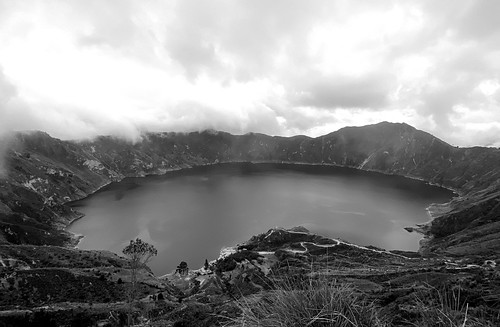 About 14km north of Zumbahua, the famous volcanic-crater lake of Laguna Quilotoa is a gasp-inducing sight. A lookout on the precipitous crater rim offers stunning views of the mirror-green lake 400m below (it glows phosphorescent green near some of the rocky edges) and the snowcapped peaks of Cotopaxi and Iliniza Sur in the distance.

When you ask the locals how deep it is, they inevitably say it has no bottom, which seems entirely plausible given its awesomeness (the geologists say 250m).


Quilotoa is a water-filled caldera and the most western volcano in the Ecuadorian Andes. The 3-kilometre (2 mi)-wide caldera was formed by the collapse of this dacite volcano following a catastrophic VEI-6 eruption about 600 years ago, which produced pyroclastic flows and lahars that reached the Pacific Ocean, and spread an airborne deposit of volcanic ash throughout the northern Andes. This last eruption followed a dormancy period of 14,000 years and is known as the 1280 Plinian eruption. The fourth (of seven) eruptive phase was phreatomagmatic, indicating that a Crater lake was already present at that time. The caldera has since accumulated a 250 m (820 ft) deep crater lake, which has a greenish color as a result of dissolved minerals. Fumaroles are found on the lake floor and hot springs occur on the eastern flank of the volcano.

Quilotoa is a tourist site of growing popularity. The route to the "summit" (the small town of Quilotoa) is generally traveled by hired truck or bus from the town of Zumbahua 17 km to the South, or more commonly by bus from Latacunga. Visitors no longer have to pay two US dollars each to look from the lip of the caldera. There are a number of simple hostels in the immediate area offering services such as mules and guides. Activities include a four to five-hour hike around the caldera (whose diameter is just over 3 km). The caldera rim is highly irregular and reaches its maximum elevations (3,810 m to the N, 3,894 m to the NW and 3,915 m to the SE) at three lava domes. The 10 km hike is sandy and steep in places and can be quite taxing, particularly if there is fog.

It's a half-hour hike down from the viewpoint (and 1-2 hour hike back up the 280-meter vertical ascent), and very basic lodging down in its bowl. Camping is permitted at the bottom of the crater, but there is no potable water (except half-litre bottles sold at the hostel).

The lake surface is located at 3,500 m asl. The total volume of water stored in Lake Quilotoa is 0.35 km3. According to local inhabitants, the lake level has been slowly declining over the last 10 years. Travertine deposits occur along the shore up to 10 m above the lake level (in the year 2000).

The village of Quilotoa and the associated crater is also a popular destination within the Quilotoa Loop and is a common starting point for the Quilotoa Traverse, a multi-day village to village hiking route.