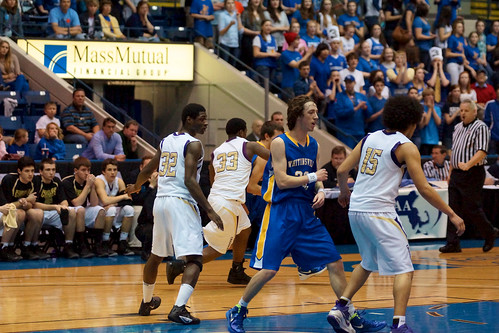 Crusaders fall to St. Joe's in heartbreaker.D3 BOYS' BASKETBALL STATE SEMIFINAL: ST. JOSEPH'S 61, WHITINSVILLE CHRISTIAN 59.By Bill Doyle TELEGRAM & GAZETTE STAFF..SPRINGFIELD— Grant Brown lofted an off-balance 3-pointer in the final second. If the shot was good, Whitinsville Christian would win and defend its Division 3 state championship on Saturday. If it was off the mark, the Crusaders’ season would end. .With Lavante Wiggins of St. Joseph’s close by, Brown didn’t have time to set himself, but his shot was on line nevertheless. ..“To be honest, I thought I was going to get a foul called,” Brown said, “but I saw it, and I thought it was going in.” ..“I was thinking, ‘Man, that would be unbelievable if that thing went in,’ ” WC coach Jeff Bajema said, “and I thought it was.” ..“When he took it, I said, “God, it looks good,’” St. Joseph’s of Pittsfield coach Paul Brindle said. ..The shot hit the back of the rim, however, and bounced away, and St. Joseph’s held on for a 61-59 victory in a Division 3 state semifinal last night at the MassMutual Center. ..“The hoop angels just weren’t there today,” Bajema said. ..St. Joseph’s (20-5) will play Danvers at 12:30 p.m. Saturday at the DCU Center for the state title. This will be the first state final for St. Joseph’s since it won it all in 2001. ..Whitinsville Christian, the defending Division 3 state champion, finished 17-6. ..Colin Richey led the Crusaders with 15 points, including eight in the fourth quarter. His drive put his team ahead, 59-54, with 3:13 left, but WC didn’t score again. ..“They were denying Colin the ball,” Bajema said, “and Colin is the guy who makes it happen for us. We ran some stuff for other guys, but their team quickness really affected us, especially down the stretch. We just couldn’t get into a set.” ..Bajema also thought Whitinsville missed center Jesse Dykstra, the team’s only starting senior, after he fouled out with 2:02 left and the score 59-54. ..St. Joseph’s scored the game’s final seven points at the foul line. Mike McMahon made four of the free throws, including a pair with 10.6 seconds left to give St. Joseph’s its first lead, 60-59, since late in the third quarter. ..With WC leading, 59-58, Tim Dufficy missed the front end of a one-and-one with 22.5 seconds left. After McMahon put St. Joseph’s ahead, Dufficy threw the ball away and Roberson was fouled with 6.8 seconds left. ..Dufficy was upset at himself after the game, but Richey came to his defense. ..“That’s not why we lost,” Richey said. “He shouldn’t feel like that’s a big reason. That’s not why we lost. We lost because we didn’t execute down the stretch, we didn’t make shots, and we didn’t rebound. They just outworked us down the stretch.” ..Roberson made one of two at the line to make it 61-59. After a timeout, WC got the ball to Brown, but his shot missed by inches. Bajema planned to call another timeout when his Crusaders got the ball in the frontcourt, but changed his mind. ..“I thought he had a step on the kid,” Bajema said. ..Brown finished with 12 points. Dufficy had 10. ..Joe Wiggins led St. Joseph’s with 17 points and 12 rebounds, including 13 points and 10 rebounds in the second half. McMahon scored 13 points. ..Whitinsville Christian led for most of the game and was up by nine, 36-27, when Brown scored on a put-back early in the third quarter. Tank Roberson scored seven of his 15 points during a 16-4 run that gave St. Joseph’s a 43-40 edge with 3:31 left in the third. Brown’s 3-pointer highlighted a 7-2 run that regained the lead for WC, 47-45, entering the fourth. ..With four starting juniors returning next year, the Crusaders should be strong again, but the loss will stick with them. ..“It’s definitely heartbreaking,” Richey said. “We put so much time into this over the summer, even since we were kids. So it was definitely tough. You’re going to remember this forever. You’re going to remember this more than if you won the game.”