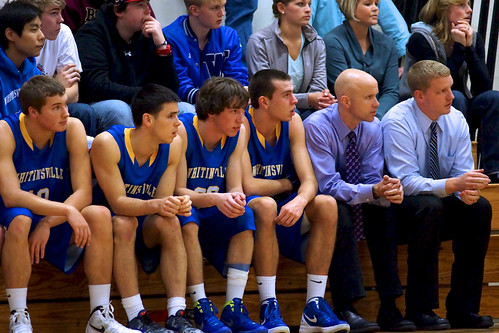 Whitinsville Christian 85, Hopedale 63: Undermanned..By Jared Keene/Daily News staff..At 6-foot-6, senior Paul Manning is the main rebounder and inside threat on Hopedale’s boys basketball team...Just 2:25 into last night’s contest with Dual Valley Conference rival Whitinsville Christian, however, Manning picked up his second foul, earning him a spot on the bench for the rest of the half...The Crusaders took full advantage, out-rebounding the hosts by 18 in the first half while lighting it up from the field in a 85-63 victory...“If I didn’t get those silly fouls at the beginning of the game, I felt like I would have played the whole first quarter, so that alone would have kept the rebounding up to par with the other team,” Manning said. “We wouldn’t have been down so much.”..Hopedale coach Tony Cordani saw a variety of factors key the visiting Crusaders...“They came ready to play and I don’t know what their percentage was in the first half, but they shot the ball extremely well,” said Cordani after his team fell to 6-3 (2-1 DVC). “And Paul got into a little foul trouble, so we couldn’t rebound with them. The combination of their exceptional shooting in the first half and our lack of rebounding was the difference, I thought.”..Whitinsville Christian seemed to set the tone early by forcing a turnover and an airball on the Blue Raiders’ first two offensive possessions...The Crusaders held a 19-9 lead after the first quarter, thanks in large part to their eight offensive rebounds — allowing for second-chance opportunities — and tough man-to-man defense that seemed to fluster the Hopedale offense...“One of our keys to the game was to win the rebounding battle tonight and keep them off the offensive glass and for the most part we did a pretty good job of that,” Whitinsville coach Jeff Bajema said. “We’ve also been working hard on our defense. We don’t have the height this year, but we’ve got some quick guards and kids that like to defend. That’s our game right now.”..In the second quarter, the Crusaders also started taking advantage of the various zone defenses the Blue Raiders played. Whitinsville Christian spread the floor and used quick, crisp ball movement to end up with numerous open 3-pointers...Of the seven triples the Crusaders hit for the game, five came in the second quarter, a period in which the visitors built their lead to 25 by halftime (50-25). Two of those five treys came from the hand of Colin Richey, who finished with a game-high 20 points...“I’ve seen these guys play on a number of occasions and the teams that have gone man-to-man (against them), Richey has been able to penetrate and then he becomes a problem,” Cordani said of the decision to play zone. “I was just hoping that we could weather the storm a little bit and have some in the tank at the end. It was a gamble we took. I guess we’ll see what happens next time we play them.”..Hopedale came out a different team in the third quarter, out-rebounding Whitinsville by six while outscoring the Crusaders 22-12 to pull within 62-47...Just 15 seconds into the fourth quarter, the Blue Raiders cut the lead to 13, but that was the closest they got the rest of the way, as Whitinsville used a 14-4 run to take its lead back up to 23 at 76-53 and ice the game...--------------..Colin Richey led all scorers with 22 points, including two 3-pointers for the visiting No. 9 Crusaders (4-1, 3-0 Dual Valley). Tyler VandenAkker added 15 points, and Antonio Estrella scored 12 for Whitinsville Christian. Jeremy Bacon's 15 points paced the Blue Raiders (6-3, 2-1). ..WHITINSVILLE CHRISTIAN.Name.FGM.3PM.FTM.Pts..Tim Dufficy.4.2.0.10.Eric Monroe.1.1.0.3.Connor Dolan.2.0.0.4.Scott Ebbeling.1.0.1.3.Jesse Dykstra.4.0.0.8.Antonio Estrella.6.0.0.12.Colin Richey.8.2.4.22.Grant Brown.3.2.0.8.Tyler VandenAkker.7.0.1.15.Totals.36.7.6.85..HOPEDALE.Name.FGM.3PM.FTM.Pts..Colby Caso.1.0.0.2.Cole Dedonato.0.0.0.0.Shane Finnegan.2.2.0.6.Kevin Lynch.4.1.0.9.Evan Lerner.2.0.2.6.Ian Strom.4.1.0.9.Dan Manoli.1.0.0.2.Paul Manning.4.0.1.9.Jeremy Bacon.3.0.9.15.Nick Walker.2.1.0.5.Totals.23.12.12.63.