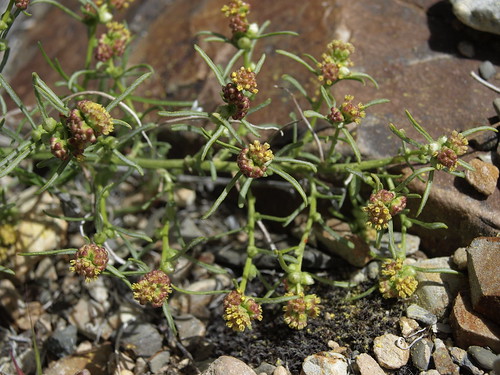 This common shrub of desert floodplains (alluvial fans and dry washes) is found below about 2000 meters (6500 feet) in the southwestern Great Basin, Mojave, and Sonoran deserts of southwestern North America, from central Nevada and southwest Utah southward into northwestern Mexico, and including adjacent central and southwestern California.

The name cheesebush is descriptive both of the plant's odor (especially after rain), and of the color and texture of the wings on the female heads. It was previously separated with two other species in the genus Hymenoclea, distinguished by having involucres with flat translucent wings instead of forming spiny burs. But species of the two genera hybridize in nature, and hybrids between cheesebush and bursage (Ambrosia dumosa) are also found in this part of the White Mountains.

The first flowers of the season were opening on branches closest to the ground where they received extra warmth during the day. The obvious yellow male flowers are in small heads at the branch tips. The even smaller female heads can be seen just below the male heads on the stems, enveloped by the developing translucent wings, and each containing a single female flower putting out its style to catch pollen.