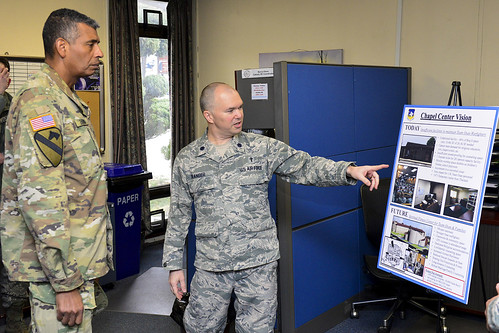 OSAN AIR BASE, Republic of Korea (Jan. 5, 2017) -U.S. Air Force Chap. (Lt. Col.) Jeffrey Granger, 51st Fighter Wing wing chaplain, explains the vision for future improvements to the Osan Air Base chapel is to U.S. Army Gen. Vincent K. Brooks, United States Forces Korea commander at Osan Air Base. Granger took the audience with Brooks as an opportunity to highlight how the size and scope of Team Osan has increased over the years while the chapel facilities have not yet advanced, and how funding for new chapel facilities will impact the entire base. (U.S. Air Force photo by Senior Airman Victor J. Caputo)

** Interested in following U.S. Pacific Command? Engage and connect with us at www.facebook.com/pacific.command and twitter.com/PacificCommand and www.pacom.mil/ **