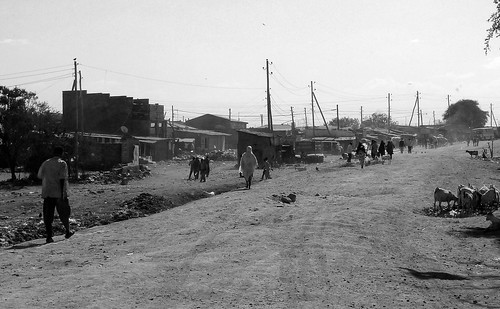 My favourite border crossing of all my trips: Between Tog Wajaale (Somaliland, Somalia) and Togochale (Somali Region, Ethiopia). Tog Wajaale is a busy village, divided into two by a dry creek which marks the border.
The picture shows the Ethiopian side of the border, called Togochale in Amharic and Tog Wajaale (like the Somali counterpart) in Somali. Instead of a barrier, there's just a rope, which is lifted by the guys hanging around in front of the shed at the left hand side whenever a vehicle arrives. The immigration facilities are located 300 m further into the village in an obscure room. So it isn't even possible to get your visa stamped directly at the border. However, most people (and animals) don't care, they just cross the border without any control. And many people do this, because of the famous market on the Somali side, where e.g. electronic goods are sold which aren't available in Ethiopia. Even people from Jijiga come here for that. The Ethiopian side is also attractive for the Somalis, because there are four banks in this village. The reason for that is that Somaliland - as an unrecognized state - doesn't have access to the international banking system, so some people manage their accounts through Ethiopian banks in Togochale.