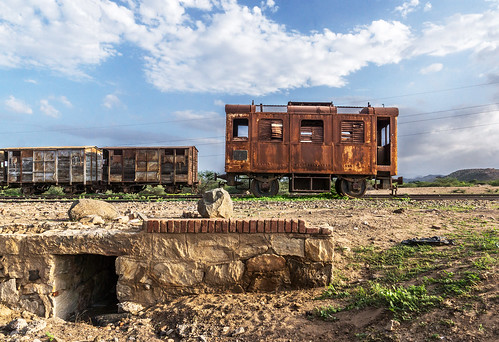 A Fiat TIBB (Tecnomasio Italiano Brown Boveri) 4-wheel diesel-mechanical railcar built by Brown Boveri of Switzerland (Works No.4067 of 1935) out of use in the yard at Mai Atal , on the lower coastal section of the Eritrean Railway. It originally worked on the Mogadishu-Villabruzzi (present day Jowrah) Railway, a 950mm gauge system, constructed between 1914 and 1927 by the Italian Somali-land colonial authorities. The railway ran through southern Somalia using Italian locomotives and equipment similar to those used in Eritrea. This line was subsequently dismantled by British troops during World War II, and some equipment, including this railcar, were moved to the Massawa-Asmara railway in Eritrea in 1942. In latter years, before the civil war, it was used as a mobile generator, and on 7th December 2014 was found abandoned in the freight yard at Mai Atal, near Massawa, along with a number of freight box wagons.

© Gordon Edgar - All rights reserved. Please do not use my images without my explicit permission

Here's an historic photo of it in Somalia:
www.trainweb.org/eritrean/scrapbook/who/ferrovie-colonial...