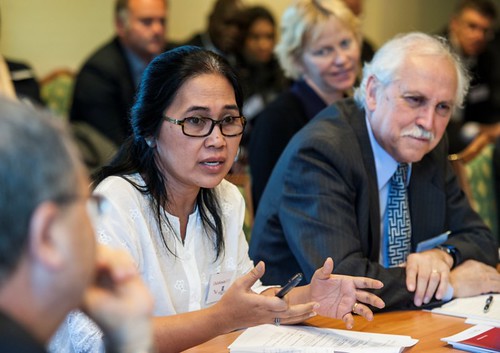 Around 100 of the world’s most prominent armed conflict mediators and peace process actors gathered in Oslo, Norway from 16 to 17 June 2015, to share their experiences of peacemaking as part of the thirteenth annual Oslo Forum.

The overarching theme of the 2015 Forum was ‘Peacemaking in the new world disorder’, reflecting the momentous events that have shaken up the international system over the last year including deepening geopolitical fissures, the fragmentation of states following the ‘Arab Spring’, the seizure of territory by non-state armed groups, and challenges to state sovereignty in Europe. The Forum also featured panel discussions, debates and roundtable sessions on a variety of topics including the Islamic State phenomenon, the peace process in Colombia, insecurity and instability in Northern Africa and the Middle East, tackling Nigeria’s multifaceted security challenges and prospects for rapprochement between Iran and the West.

Photo: From L - R: Ms Eva Kusuma Sundari, Senior Advisor, State Ministry of National Development Planning/BAPPENAS, Indonesia and H.E. Mr Luis Maira, Adviser in the Dialogue for Peace between the Government of Colombia and the Revolutionary Armed Forces of Colombia (FARC) and former Minister of Planning and Cooperation, Chile.