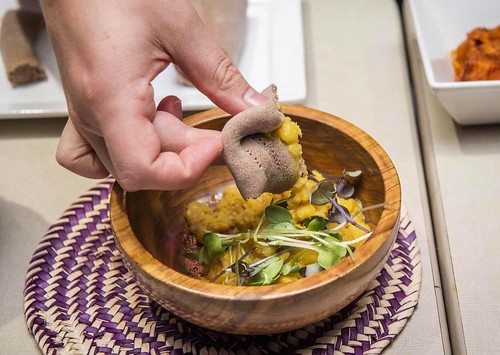 Ethiopians and Eritreans usually eat with their right hands using pieces of injera to pick up bites of entrées and side dishes. Injera is simultaneously a food, eating utensil, and plate. When the entire "tablecloth" of injera is gone, the meal is over. Utensils are optional.

Injera is a sourdough-risen gluten-free flatbread with a slightly spongy texture. It's traditionally made out of tiny, iron-rich teff seeds, which are ground into flour. It's the national dish of Ethiopia and Eritrea and central to any meal in the region. The porous texture of one side makes injera good for scooping up sauces and dishes.

Teff production is limited to certain middle elevations with adequate rainfall, and, as it is a low-yield crop, and is it is relatively expensive for the average household. To make injera, teff flour is mixed with water. The fermentation process is triggered by adding ersho, obtained from previous fermentations. The mixture is then allowed to ferment for an average of two to three days, giving it a mildly sour taste. The injera is baked into large, flat pancakes. Some believe that the production of teff dates back as far as 4000 BC.