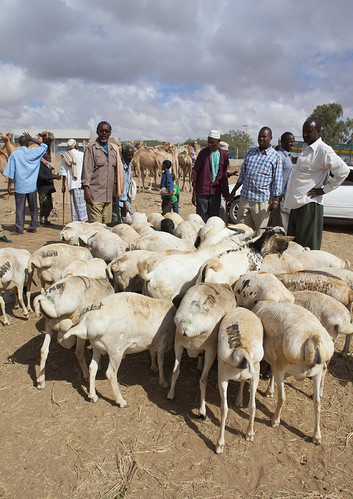 Livestock farming is the backbone of Somaliland economy. Every year, an estimated 4.2 million heads of sheep, goats, cattle and camel –mainly living animals- are raised and sailed to neighboring Arab States via the port of Berbera. This number has been steadily growing over last years. Although from 1998 to 2009 (roughly), Saudi Arabia, Yemen and Oman’s import of meat coming from the African horn was banned because they suspected it was infected by the Rift Valley fever. This measure deeply affected the economies of Somaliland and Ethiopia.
Nevertheless, the growing popularity of Hajj among Muslim worshipers has increased the demand in meat over the past years. The traditional yearly pilgrimage to Mecca, Saudi Arabia and the rapid growth made the economy of Somaliland pick up again.
And Saudi Arabia announced in early 2011 that it would increase livestock imports by two-fold by the following year. At the same time, Somaliland is pushing forward plans to get a partnership with Malaysia for the exportation of Halal meat.
Indeed, more than a half of the population in Somaliland relies on meat, milk and other livestock products on a daily basis and 70% of job opportunities are related to livestock raising business. Stockbreeding-related activities really are the main source of livelihood for the majority. Besides, the livestock sector represents 50% of Somaliland GDP and nearly the whole export earning.
But nowadays, nomadic stockbreeding is endangered by alternate severe droughts and flash floods combined with overgrazing, which provoke a lack of pasture available for the animals.