Home » Photos » Back from the market - Burao Somaliland

Back from the market - Burao Somaliland 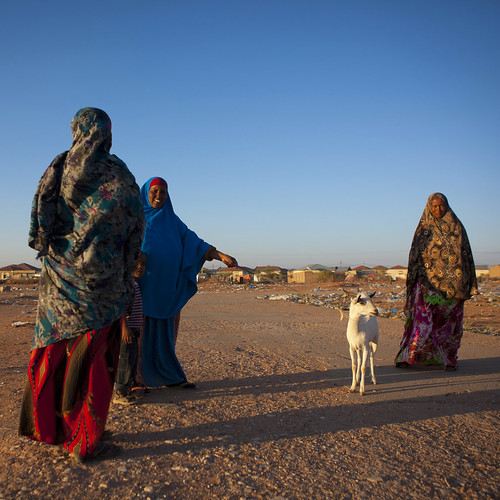 I do not know why i had the go to visit Burao as once in the town, it was forbidden to go out of the car! Too dangerous said the escort! It seems that 15 days before, 3 people had been shot by Puntland men...
I was just allowed to visit the camel market, but a local policeman came and shout after my driver saying "do you want the foreigners to be killed?! Get out of here!"
Well...back to the hotel...
Formerly a British colony, Somaliland briefly reached its independence in 1960. It is one of the three Territories, with Puntland and former Italian Somalia that compose the current State of Somalia.
Somaliland proclaimed its independence in 1991, adopting its own currency, a fully independent government, working institutions and police. The authorities organized a referendum in 2001, advocating once again for full independence. However, to date, it is not internationally recognized.
Ethiopian Prime minister Meles Zenawi is the only one to speak about a Somalilander president, recognizing implicitly the existence of an independent State. Indeed the economy of neighboring Ethiopia dramatically depends on Somaliland stability, since the landlocked country’s main trade route passes through the Somalilander port of Berbera… And vice-versa, the economy of Somaliland largely depends on the taxes and duties it charges Ethiopia. Besides that, the principal economic activity of Somaliland is livestock exportation to the Arabian Peninsula. Most people are Sunni Muslims and speak Arabic, as well as some Somali dialect and many of them, English.Lastely, the East African demography being based on clan alliances, it is no surprise that the frontiers drawn by the colonists don’t match the ethnic divisions of territory, leading to open clashes. More broadly, this problem is recurrent across the African continent.