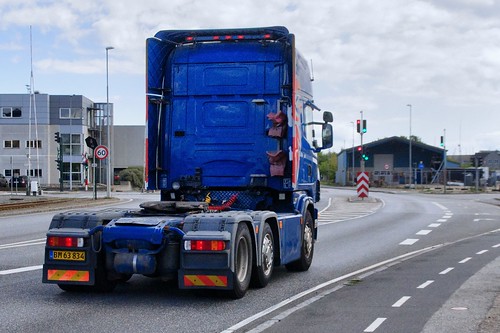 Notice the engine badge saying "610", so must have been manipulated (it was like this in 2012-13 as well). For really old trucks like this, the vehicle registry doesn't have any engine data, so the actual number of hp is unknown.

Uploading FOUR photos of the same truck, in the same setting is totally unheard of, but in this case I'm making an exception. I feel that this nice old king of the road has something to offer from every angle.- notice the different conditions of the left vs right side skirts, indicating that it was bought by a vintage Scania fanatic for restoration. The right side certainly looks good.

Tip: to locate trucks of particular interest to you, check my collections page, "truck collection" (www.flickr.com/photos/lavulv/collections/72157684190396672/ ) - here you will find all trucks organized in albums, by haulier (with zip-codes), year, brand and country.

Retirement age for trucks: many used trucks are offered for sale on international markets. If sold to a foreign buyer, this will not be listed in the danish motor registry, so a "retired" truck may or may not have been exported. In other words, the "retirement age" only shows the age, at which the truck stopped running on danish license plates.