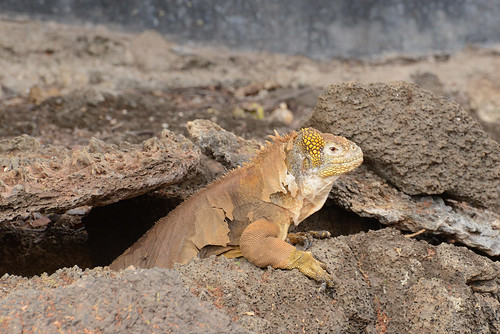 Galapagos Land Iguana (Conolophus subcristatus) is a species of iguana endemic to the Galápagos Islands in the dry lowlands of Fernandina, Isabela, Santa Cruz, North Seymour, Baltra, and South Plaza / Fausto Llerena Breeding Center is a short walk from the center of town; the Charles Darwin Research Station is the operational center of the international Charles Darwin Foundation. The visitor center contains exhibits dealing with climate and geography and provides insight into the evolution of flora and fauna as well as current conservation programs. The Darwin Station conducts research and provides technical assistance to other researchers, the Galapagos National Park and other governmental agencies. The results of the research are published in scientific journals, reports, and included in interpretive displays for visitors. The Darwin Station also provides environmental education to communities and schools in Galapagos. The Fausto Llerena Tortoise Center, a long-term program jointly operated by the Galapagos National Park Directorate and the Charles Darwin Foundation, began in 1965 to save the giant tortoise population on Isla Pinzón. It was quickly expanded to include other populations, specifically that of Isla Española where only 14 individuals remained. As of 2008, more than 4,000 young tortoises from eight different populations have been repatriated to their island of origin, with nearly 1,500 going back to Española. At the Tortoise Center, visitors can observe a variety of tortoises, including hatchlings, juveniles, and full-grown individuals.