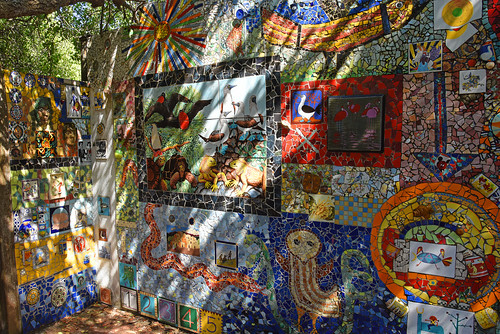 Jardín Cerámica - through the arching dragon gateway, near the entrance to the Charles Darwin Research Center is Jardín Cerámica; Don Quixote and Sancho Panza riding hobbyhorses and a mermaid playing with lobsters are just two of the ceramic murals you’ll find in this garden created by local artist Cristina Nelson Gallardo / Puerto Ayora is a town on the south shore of Isla Santa Cruz and is the seat of Santa Cruz Canton comprising the islands of Baltra, Bartolomé, Marchena, North Seymour, Pinta, Pinzón, Rábida, Santa Cruz, and Santiago. The town is named in honor of Past President Isidro Ayora of Ecuador. Puerto Ayora is the most populous town in the Galápagos Islands, with approximately 12,000 inhabitants and has developed the best infrastructure in the archipelago. The larger of the two Galápagos banks, Banco del Pacifico, is in Puerto Ayora, as well as schools, hotels, restaurants, clothing stores, hardware stores, grocery stores, marine stores, tourist shops and night clubs. It is the best place in Galápagos for communicating with the outside world via numerous cybercafes with Internet access or telephone offices. Puerto Ayora emergency medical facilities include a hospital that opened in 2006 and the island's only hyperbaric chamber. The main Avenue is named Avenida Charles Darwin and begins at the main dock of Puerto Ayora and ends at the Charles Darwin Research Station, home to both the Charles Darwin Foundation and the Galápagos National Park. Puerto Ayora is noted as the focal point of the Galápagos’ conservation efforts.