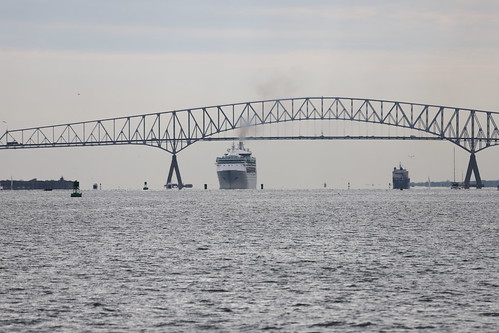 I am in Baltimore with Pam for the Fashion Royalty Convention. The Royal Caribbean Grandeur of the Seas was scheduled to be in port on October 12th (arriving at 7am and leaving at 4pm) and I wanted to take pictures of this wonderful ship leaving port in the afternoon. But on the previous cruise, she ran into bad weather and was delayed coming into port. So I shifted my schedule and went to Fort McHenry where I took pictures of the Grandeur as she came in around 11am (four+ hours late). You normally do not see this as they come in early in the morning. This was fun for sure to get these pictures. You can see the Francis Scott Key Bridge behind the ship and Fort Carroll near the bridge. While the travel plans for many of the people on these cruises were inconvenienced, it worked out well for me. Taken in Baltimore, Maryland from Fort McHenry National Monument and Historic Shrine on Saturday October 12th, 2019.