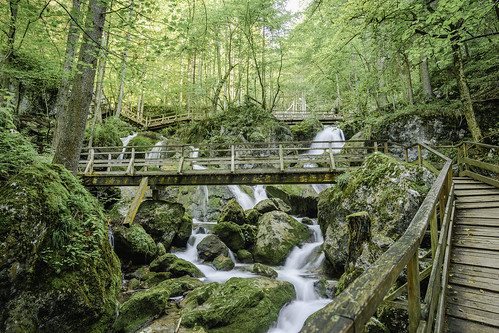 Pedestrian bridge over the Myra Falls
The Myrafälle lie in a ravine in the community Muggendorf in the Austrian province of Lower Austria (NB not to be confused with the mirafalls Mirafall) 50 km further west in the Ötschergraben). The gorge was cut by Myrabach, a small tributary of the Piesting. The Myra, as the stream is called, rises at the foot of the lower mountain from the Mythalucke, a fabled spring fed by an underground lake. Although the Myra is only a few kilometers long, it operated in the Myra Valley a variety of mills and sawmills.

In 1899, plans were made for "the exploitation of this waterfall for industrial purposes and thus the destruction of a natural beauty".

In 1912, Lord Oskar von Rosthorn (Oskar Edler von Rosthorn) built a small pumped storage power station on the Myra Falls, which was in operation until 1974/1975.

The actual gorge with the waterfalls is about 600 meters long; Its height difference is 70 meters. The gorge runs from north to south and is protected as a natural monument. The underground of the gorge is limestone. The Myrabach falls in several cascades through the gorge. At the top and bottom of the water is dammed in a small pond.


Memorial plaques at the entrance to the Myra Falls
A well-developed and popular hiking trail leads through the gorge. It was built in 1885 by the Pernitzer branch of the Austrian tourist club with 19 bridges and 8 ascents (opening: 9th August 1885) and has been supervised ever since.