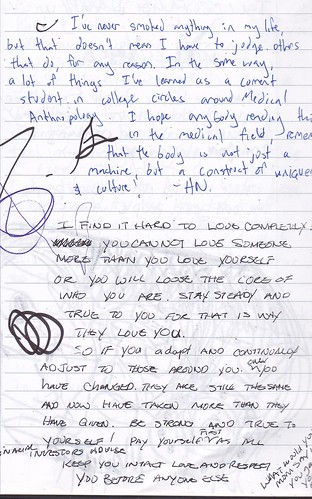 The automatic writing project started out as an activity among friends and locals. I would write a line someone else would write a line and so on... Then people would overhear us and ask if they could participate and write something too (which surprised me) of course I said "yes!" At that point I realized that lots of people have something to say. I started asking strangers to add entries, then I graduated to offering people $1.00 to participate, some people do not accept the dollar and some pay me a $1.00 (paying it forward). It's becoming quite a lovely, surprising and compelling project. People from many walks of life are participating: homeless, a news reporter, academics, students, doctors, drug addicts, lawyers, tourists etc... People have written things in my journal that they'd never say out loud, not to anyone. Some of it's so sad, some intriguing, hilarious and so on... At the end of the day, every one of these people understand that their entries are being uploaded to the internet and are comforted in knowing that they will be heard. I have no idea where this is going, but it's going just fine! FYI: English is not everyone's first language here. I will be illustrating the book/journal after the text is done. I hope that everyone who reads these entries learns something about people, mostly that we never know what someone else is going through.