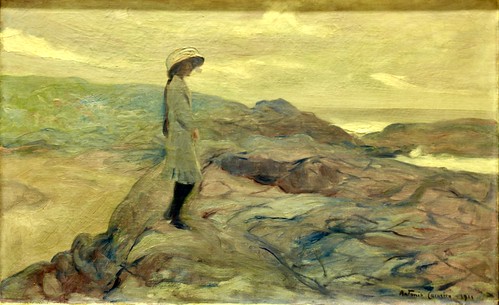 He was one of the great names in Portuguese painting and drawing from the transitional period between the decadence of fin-de siècle art and modernist experimentation.

His frenetic creation of landscapes, self-portraits and historical and religious scenes, in hundreds of oil paintings, sanguines and water-colours, was a reaction against the naturalism of his peers, and was an erudite approach to symbolist culture.

He advocated art as the worship of the spiritual and beautiful and put these values at the centre of his poetic and artistic work; these were two trends that he articulated in the literary movement of Águia and Renascença Portuguesa. He cultivated a prophetic persona, concentrating religiously on art; and his growing focus on introspection and idiosyncrasy led him to make expressionist, abstract, and lyrical gestures.

His vast body of work garnered awards overseas, gained him success in Brazil, was the subject of official praise in Portugal, PLACING HIM IN HISTORY AS ONE OF THE MAJOR FIGURES IN MODERN PORTUGUESE ART.

António Carneiro passed away in Porto. The António Carneiro house-workshop was opened to the public (1973), his work was acquired by major national museum collections, and permanent spaces were also set aside for him in several regional cultural institutions.

Estranged from his father and with his mother having passed away, António Carneiro was sent to the Barão da Nova Sintra orphanage in Porto (1879-90), where his talent for copying religious illustrations meant he was able to relatively quickly get a place at the Porto Academy of Fine Arts, where he studied historical drawing with Marques de Oliveira (1884-90).

He continued his studies by learning sculpture with Soares dos Reis (1889), but the latter's suicide meant he transferred to painting with João António Correia (1890-96).

He was also involved in other creative circles of the times, and published poems, took part in exhibitions and edited the periodical Geração Nova. These literary and artistic connections continued in his association with the philosophical movement of the tragic fin de siècle generation of Porto intellectuals.

Of these, the most significant was Teixeira de Pascoaes, whom he met in Amarante, and with whom he formed a long-term creative friendship. Sponsored by the Marquis de Praia e Monforte, Carneiro went to Paris to study at the Académie Julian under the painters Jean-Paul Laurens and Benjamin Constant (1897).

He travelled through Italy and Belgium (1899), and over this period he gradually distanced himself from the naturalist values predominant in Portugal, and adopted a symbolist discourse.

While still in France, he was awarded the silver medal at the Paris Universal Exhibition (1900) for his triptych A Vida [Life], which is still considered to be one of the greatest masterpieces in the history of Portuguese painting.

He returned to Portugal the following year. He had two solo exhibitions, at Misericórdia do Porto (and again in 1902) and the Salão da Ilustração Portuguesa [Portuguese Illustration show], Lisbon; although the market of the time could not keep up with the pace at which he produced his work, with its sacralising and erudite approach paying tribute to national figures.

He participated in the 3rd Salão da Sociedade Nacional de Belas-Artes [National Society of Fine Arts show] (1903). He was also awarded silver medals at the Louisiana Purchase Exhibition (1904) and jointly with Carlos Reis at the Barcelona International Exhibition (1907), and received a gold medal at the Rio de Janeiro Centennial Exhibition (1908).

In 1911, Carneiro was nominated a Professor at the Porto Academy of Fine Arts (which became a life-time position in 1918), and after a temporary sojourn in Paris, the following year he took the helm at the magazine Águia together with Pascoaes, where he was responsible for the illustration and literary direction.

Over the 1910s, he also illustrated books by António Correia de Oliveira, João de Deus and Visconde de Vila Moura. However, as he was unable to make a living from his art, he sought his fortune in Brazil, where he spent two years (1914-16). There he held several solo shows at the Galeria Jorge (Rio de Janeiro) and at the Associação Comercial do Paraná [Commercial Association of Paraná] (Curitiba).

In addition to the proliferation of self-portraits, and starting out on his fabled, unconventional and experimental tale of family life, Carneiro, who did not yet have a studio, spent long periods at friends' houses in the north of Portugal, and this is from where he took the emblematic landscapes seen in his work: hundreds of little seascapes of the beaches of Leça da Palmeira and Figueira and Foz, and the Melgaço thermal baths, in oils, line-drawing and watercolours.

However, while his work was moving towards a solipsist, intimate and spiritual form of expression, the 1920s were actually years of revelation, exhibition and public recognition.

As well as a solo show at the National Society of Fine Arts (1922), the town of Amarante paid tribute to Carneiro and to Teixeira de Pascoaes (1924), and this period also saw the inauguration (with an exhibition) of his house-workshop in Rua de Barros Lima (now Rua António Carneiro), Porto, where he lived with his son, Carlos Carneyro, and which paved the way for his gilded and idealistic sonnets.

Having managed to obtain his workshop, and once again honoured by Porto's Palácio da Bolsa, Carneiro returned to Brazil (1929), where he held exhibitions in Rio de Janeiro and São Paulo, and sold the most work of his career.

Although he was then nominated Director of the Porto Academy of Fine Arts, he was never able to take up the position. The ’franciscano da belleza‘ [Franciscan of beauty], as he became known in Brazil, died shortly after his return.

Since his death, his work has been shown in several exhibitions, from his illustrations for the Divine Comedy (Rome, 1964, Ateneu Comercial do Porto, 1965, Assumption College, 1967), to smaller retrospectives (SNI, Lisbon; Porto Fine Arts school, Porto, 1958; CMT Matosinhos, 1960) and larger ones at the Calouste Gulbenkian Foundation and the Museu Soares dos Reis (1973), and a major retrospective at the CAM (2005). After the publication of his poems Solilóquios: sonetos póstumos [Soliloquies: posthumous sonnets] (1936), with an introduction by Júlio Brandão, the António Carneiro gallery was also set up at the Museu Municipal Amadeo de Souza Cardoso (1953), his house-workshop was opened to the public in Porto (1973), and a space for his work was set aside at the Museu da Quinta de Santiago da Câmara in Matosinhos (1996).