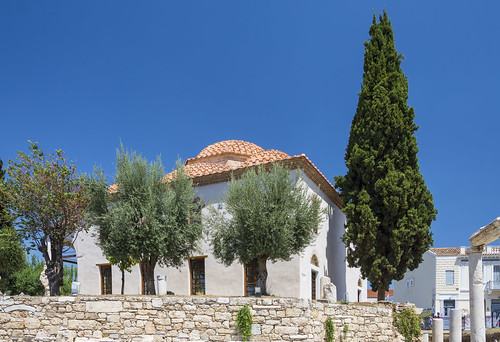 The Fethiye Mosque ("Mosque of the Conquest") is a 17th-century Ottoman mosque in central Athens, Greece.

It is located on the northern side of the ancient Roman Agora in Athens and was built on the ruins of a Christian basilica from the middle Byzantine period (8th/9th centuries).

Only a fragment of the mihrab survives from this mosque, which was demolished and replaced by the present structure between 1668 and 1670. The new mosque comprises a porch and a large rectangular main hall, crowned by a dome supported by four pillars. The central dome is flanked by half-domes on each side, and by smaller domes on each corner. The porch is supported by five arches, each crowned by a small dome, resting on masonry on the sides and four pillars in the middle.

During Ottoman times, it was commonly known as the "Wheatmarket Mosque". During the brief occupation of the city by the Venetian forces in the Morean War (October 1687 – May 1688), the mosque was converted by the Venetians into a Catholic church, dedicated to Dionysius the Areopagite.

Following the outbreak of the Greek War of Independence, in 1824 the disused mosque was used as a school by the Filomousos Eteria of Athens. At about the same time, or shortly after the end of the war, the mosque's minaret was torn down. From 1834, after Greek independence, and until the early 20th century, it was used successively as a barracks, a military prison and finally as a military bakery, at which point additions were made to the building to house the bakery's kilns.

In autumn 2010, the Greek Ministry of Culture ordered the emptying of the building from the various antiquities stored there, and the beginning of the process to restore it and open it to the public. The restoration was completed in November 2016 and opened to the public as a space for cultural events.