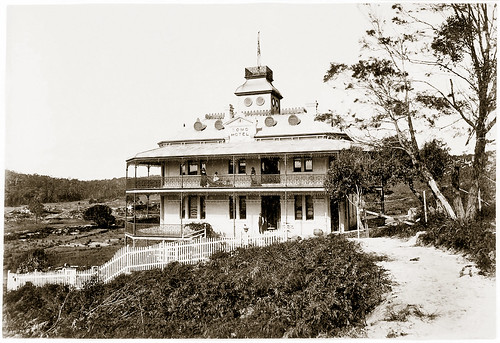 IMAGE VIEW INFORMATION
- The photographer's viewpoint is looking south from the access pathway that led back to Como Station.
- The facade shows a stylized version of the original Establishment date in October 1890.
- This image was captured in the same year as the next image in this Como album, obtained from the William Robert Easdown photographic collection at the National Library of Australia. www.flickr.com/photos/88572252@N06/36781625322/in/album-7...
******************************
SOURCE INFO
- Original digitized photo-print is archived by the New South Wales State Library in their public access online image collection.
- This copy was downloaded & restored & repaired by myself, using Adobe Photoshop Creative Suite 8.0 (with duo-tone enhancement) for public share & review via Flickr.
******************************
CREDITS
Credits go to -
(a) Star Photo Co. (1894-1928), the creator of the original image, &
(b) The State Library of New South Wales, for their valuable historic photograph digitization & archiving program(s).
******************************
COPYRIGHT STATUS
- The original image is no longer restricted by any form of Copyright, per State Library of New South Wales copyright advice -
"Out of Copyright
Reason for copyright status: Created/Published Date is Before 1955
Material type: Photograph
COPYRIGHT AND PERMISSIONS:
This image may be used freely for research and review purposes. Further use may require permission. Please acknowledge that the image is from the collections of the State Library of New South Wales".
- As for my own work in creating, enlarging & substantially restoring this unique version of the original image, the only Copyright form I have applied is "Attribution-Non Commercial Use-Share Alike".
************************************
HISTORIC INFORMATION
- Construction timeline - 2nd Version
17 Dec 1889 - Multiple Tenders are invited by building contractor R. Fielding for "carting building materials from Como siding, Illawarra line, to back of Como Station", "Quarrying a large quantitiy of Stone, at Como, near station, Illawarra line" & "for 160,000 Bricks, delivered Como station, Illawarra line".
12 Feb 1890 - Multiple Tenders are invited by building contractor Robert Fielding for "Plumbing of large Hotel at Como Station", "Plastering, &c., of large Hotel at Como Station" & "for a large quantity of Iron Columns, Balcony Railings, Ornamental Castings, &c., for large Hotel, Como".
17 Oct 1890 - A Conditional Publican's license is granted to George Agnew "for premises at Como"
- More detail about the history of the Como Hotel can be found here en.wikipedia.org/wiki/Como,_New_South_Wales
- STAR PHOTO CO. was operated by the proprietor William Livermore (chief photographer). I found an early notice in the Daily Commercial News & Shipping List (Sydney) which shows the Star Photo Co. had imported 1 case of "pictures" (probably photographic glass plates) from Victoria, passing Customs on 3 Apr 1894. I would suggest that other biographical entries found on websites that claim the Star Photo Co. was only operational from 1898 would therefore appear to be incorrect. Clearly, the Co. was already actively engaged in the photographic business from at least as early as Apr 1894 & probably earlier still.