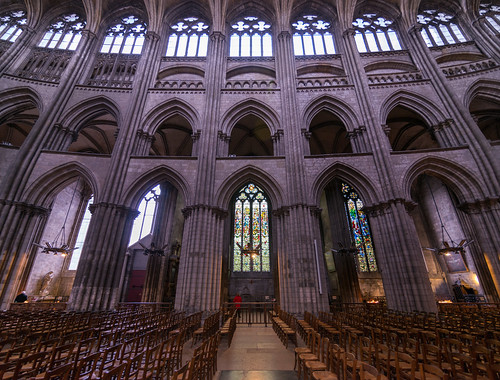 A church was already present at the location in the late 4th century, and eventually a cathedral was established in Rouen as in Poitiers. It was enlarged by St. Ouen in 650, and visited by Charlemagne in 769.

All the buildings perished during a Viking raid in the 9th century. Construction on the current building began in the 12th century in Early Gothic style for Saint Romain's tower, front side porches and part of the nave. The cathedral was burnt in 1200. Others were built in High Gothic style for the mainworks: nave, transept, choir and first floor of the lantern tower in the 13th century; side chapels, lady chapel and side doorways in the 14th century. Some windows are still decorated with stained glass of the 13th century, famous because of a special cobalt blue colour, known as "the blue from Chartres". The north transept end commenced in 1280.

Some more parts were built in Late (Flamboyant) Gothic style, these include the last storey of Saint Romain's Tower (15th century), the Butter Tower, main porch of the front and the two storeys of the lantern tower (16th century). Construction of the south-west tower began in 1485 and was finished in 1507. The Butter Tower was erected in the early 16th century. Butter was banned during Lent and those who did not wish to forgo this indulgence would donate monies of six deniers Tournois from each diocesan for this permission.

The realisation of the Butter Tower caused disturbances in the façade, which caused the reconstruction of the central portal and the west front, which begun in 1509 and finished in 1530. The original Gothic spire suffered a fire in 1514, nevertheless the project of a stone spire was denied and a wooden construction covered with gold-plated lead was begun in 1515, a parapet was added in 1580.

In the late 16th century the cathedral was badly damaged during the French Wars of Religion: the Calvinists damaged much of the furniture, tombs, stained-glass windows and statuary. The cathedral was again struck by lightning in 1625 and 1642, then damaged by a hurricane in 1683, the wood-work of the choir burnt in 1727 and the bell broke in 1786. In the 18th century, the state (government) nationalised the building and sold some of its furniture and statues to make money and the chapel fences were melted down to make guns to support the wars of the French Republic.

The Renaissance spire was destroyed by lightning in 1822. A new one was rebuilt in Neo-Gothic style, but of cast iron instead of wood. The cathedral was named the tallest building (the lantern tower with the cast iron spire of the 19th century) in the world (151 m) from 1876 to 1880. In the 20th century, during World War II, the cathedral was bombed in April 1944 by the British Royal Air Force. Seven bombs fell on the building, narrowly missing a key pillar of the lantern tower, but damaging much of the south aisle and destroying two rose windows. One of the bombs did not explode. A second bombing by the U.S. Army Air Force (before the Normandy Landings in June 1944) burned the oldest tower, called the North Tower or Saint-Romain Tower. During the fire the bells melted, leaving molten remains on the floor. In 1999, during Cyclone Lothar, a copper-clad wooden turret, which weighed 26 tons, broke and fell partly into the church and damaged the choir [Wikipedia.org]