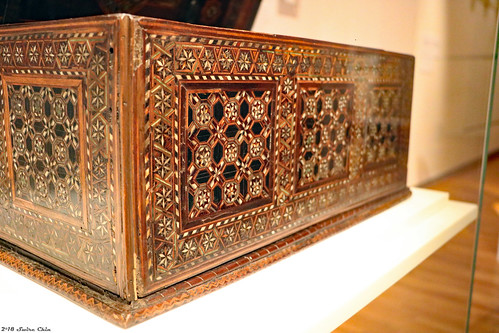 Southern Iberia (present-day Spain and Portugal) was ruled by the North African Muslims known as the Moors as early as the year 711 all the way to the year 1492. Their seven-century rule left many marks in Spanish culture.

This wooden chest made of wood with bone and mother-of-pearl inlaid from 16th century Spain shows strong influence of the Arab world's mosaic design.

On Boxing Day (no, not when people punch each other after Christmas, but a British tradition of 26 December as a holiday), I met up with John FitzGerald (Ipernity) or John FitzGerald (flickr} to visit the Aga Khan Museum, which is dedicated to Islamic artifacts. Special thanks to John for alerting me about the Emperors & Jewels special exhibition.d to Islamic artifacts.