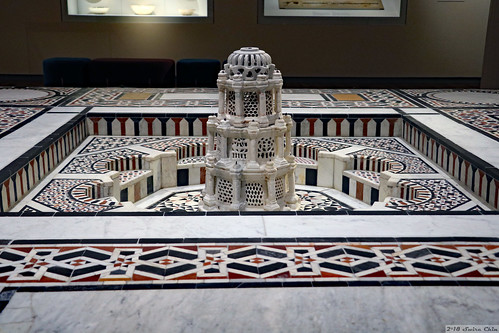 Water is a precious thing across the Middle East due to its arid climate. As such, water plays an important role in Islamic architecture for its cooling nature, practical use and "show-off" effect. Fountains are key features of paradise gardens in the wealthy households' inner courtyards.

This is a massive marble and sandstone mosaic garden pool and fountain dating to about 16th century or later of Syrian origins. (Each section of the sofas in the back off the wall seats one person, so that gives you some perspective on the scale of this pool.)

On Boxing Day (no, not when people punch each other after Christmas, but a British tradition of 26 December as a holiday), I met up with John FitzGerald (Ipernity) or John FitzGerald (flickr} to visit the Aga Khan Museum, which is dedicated to Islamic artifacts. Special thanks to John for alerting me about the Emperors & Jewels special exhibition.