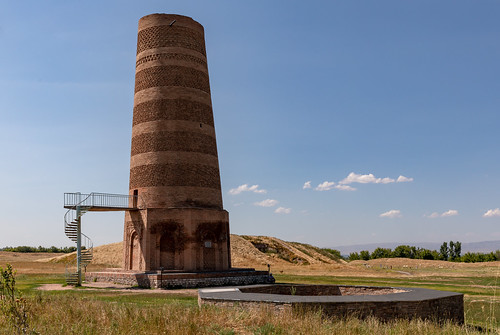 The Burana Tower is a large minaret in the Chuy Valley in northern Kyrgyzstan. It is located about 80 km east of the country's capital Bishkek, near the town of Tokmok. The tower, along with grave markers, some earthworks and the remnants of a castle and three mausoleums, is all that remains of the ancient city of Balasagun, which was established by the Karakhanids at the end of the 9th century. An external staircase and steep, winding stairway inside the tower enables visitors to climb to the top.

The tower was originally 45 m (148 ft) high. However, over the centuries a number of earthquakes caused significant damage to the structure. The last major earthquake in the 15th century destroyed the top half of the tower, reducing it to its current height of 25 m (82 ft). (Wikipedia)

Burana tower is one of the Kyrgyzstan Silk Road sites which are on the tentative list of Unesco world heritage sites.