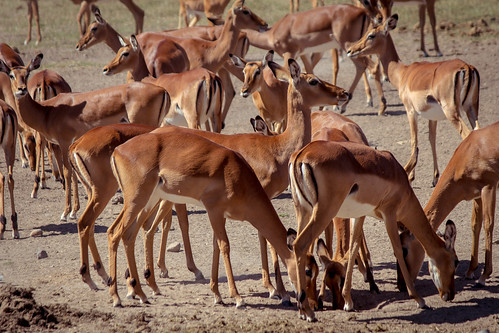 The impala (Aepyceros melampus) is a medium-sized antelope found in eastern and southern Africa. The sole member of the genus Aepyceros, it was first described to European audiences by German zoologist Hinrich Lichtenstein in 1812. Two subspecies are recognised—the common impala, and the larger and darker black-faced impala. The impala reaches 70–92 centimetres (28–36 inches) at the shoulder and weighs 40–76 kg (88–168 lb). It features a glossy, reddish brown coat. The male's slender, lyre-shaped horns are 45–92 centimetres (18–36 inches) long.
Active mainly during the day, the impala may be gregarious or territorial depending upon the climate and geography. Three distinct social groups can be observed: the territorial males, bachelor herds and female herds. The impala is known for two characteristic leaps that constitute an anti-predator strategy. Browsers as well as grazers, impala feed on monocots, dicots, forbs, fruits and acacia pods (whenever available). An annual, three-week-long rut takes place toward the end of the wet season, typically in May. Rutting males fight over dominance, and the victorious male courts female in oestrus. Gestation lasts six to seven months, following which a single calf is born and immediately concealed in cover. Calves are suckled for four to six months; young males—forced out of the all-female groups—join bachelor herds, while females may stay back.
The impala is found in woodlands and sometimes on the interface (ecotone) between woodlands and savannahs; it inhabits places close to water. While the black-faced impala is confined to southwestern Angola and Kaokoland in northwestern Namibia, the common impala is widespread across its range and has been reintroduced in Gabon and southern Africa. The International Union for Conservation of Nature (IUCN) classifies the impala as a species of least concern; the black-faced subspecies has been classified as a vulnerable species, with less than 1,000 individuals remaining in the wild as of 2008.

The Ol Pejeta Conservancy is a 90,000-acre (360 km2) not-for-profit wildlife conservancy in Central Kenya's Laikipia County. It is situated on the equator west of Nanyuki, between the foothills of the Aberdares and Mount Kenya. The Ol Pejeta Conservancy works to conserve wildlife, provide a sanctuary for great apes and to generate income through wildlife tourism and complementary enterprises for re-investment in conservation and community development.