My second human powered rickshaw ride- this time in Kyoto 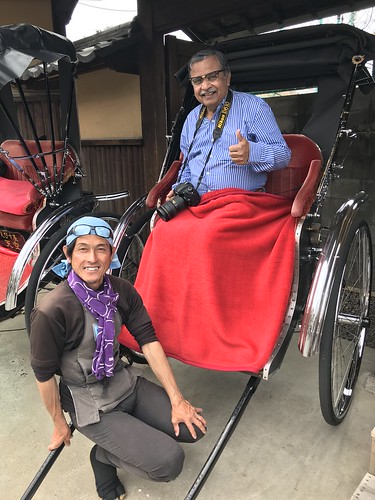 My second human powered rickshaw ride- this time on a rickshaw operated by the Kyoto- EBISUYA Higashiyama Rickshaw company. I am generally against the idea of another human being playing beast of burden, to slog his butt off and endure such physical pain just so that I could have a smooth ride, more so with some of the graded streets in Kyoto. But the rickshaw puller was an enterprising chap, and when I stopped by him to ask for directions, he convinced me to take a ride. I had also had a ride in Tokyo (see my Tokyo album), and this gentleman too assured me that this is a tourism promotion measure by the government of Japan, pulling a rickshaw is no trouble at all- it's only a question of maintaining balance once the vehicle got moving and he actually enjoyed interacting with people from around the world to give more information about his country's culture and to also learn about other cultures from around the world etc. He in fact even posed for me before we set off! (Kyoto, Japan, Apr/ May 2019)