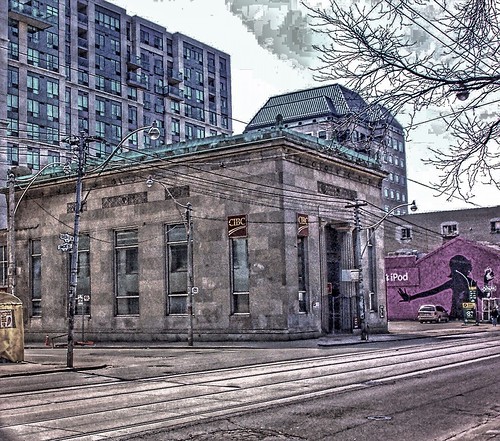 The impressive building was completed in 1930, a year after the great Wall Street crash. However, the designs for it were created prior to the economic crisis, its restrained but rich architecture a testament to the prosperous decade of the 1920s. It was constructed on the site of the Harris Hotel, an unpretentious hostelry that was demolished to provide a site for the bank. The classical proportions and basic design of the bank resemble a Greek temple. It possesses classical ornamentations and two large Doric columns on either side of the entrance. The north façade, facing Queen Street, and the west side are constructed of limestone. The west facade and the rear of the building are of yellow bricks, with limestone quoins on the northwest corner.

This bank was built in an era in which architecture was employed to convey a pre-determined image to the public. In this case, it was to imply that the institution within was solid, trustworthy, and a safe place to deposit your savings or transact business.