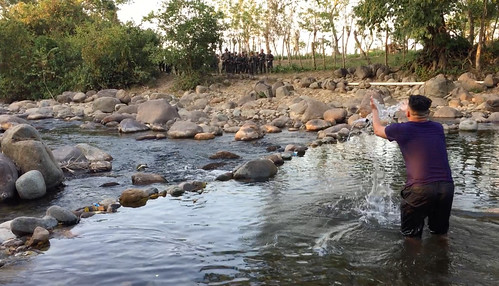 The community of Guapinol shared their beautiful river with the international delegation. As people stood along the banks or swam, the Honduran army arrived on the far bank with hands on their weapons and the rage of the community was clear. Behind the army was the fencing of the Inversiones Los Pinares mining concession. The infamous Xatruch Task Force of the 15th Battalion, known for human rights abuses, regularly patrols this river and threatens the community.

Río Guapinol is the focus of a major confrontation between the community of Guapinol (and the broader Tocoa region), and the mining concession of Inversiones Los Pinares that threatens the regions water sources. The concession was granted without proper community consultation, within the Carlos Escaleras National Park, a protected area and the source of the regions' water.

Land and Water protectors have been threatened, intimidated, arrested and killed as they organize to protect their communities.