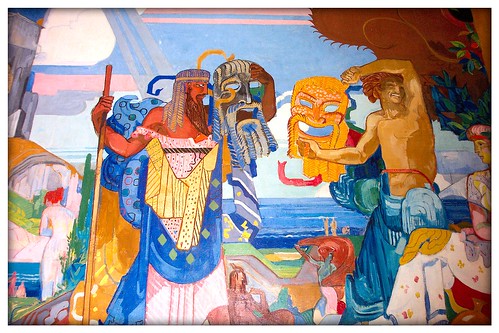 The KeyBank State Theatre is a theater located at 1519 Euclid Avenue in downtown Cleveland, Ohio.[1] It is one of the theaters that make up Playhouse Square. It was designed by the noted theater architect Thomas W. Lamb and was built in 1921 by Marcus Loew to be the flagship of the Ohio branch of the Loew's Theatres company.

Loew's State Theatre, as it was known then, was built in an Italian Renaissance style and was intended to show vaudeville shows and movies. It opened on February 5, 1921, seating 3,400.[2] Because of the desirability of having the theater's marquee on Euclid Avenue, the State Theatre was built at the back of the lot it shares with the Ohio Theatre, but with a 320-foot-long (98 m) series of three lobbies. This was the world's longest lobby serving a single theater,[2] and it contained four huge murals by James Daugherty, entitled The Spirit of Pageantry—Africa, The Spirit of Drama—Europe, The Spirit of Cinema—America, and The Spirit of Fantasy—Asia. T