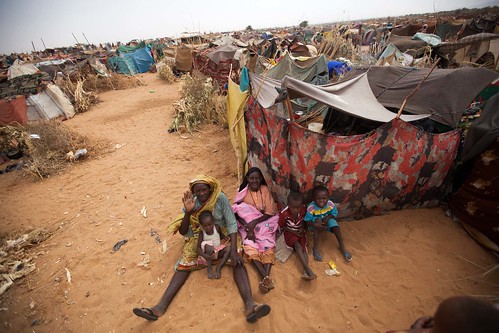 11 June 2014. Zam Zam: A group of women and children sit next to their shelters in a new settlement in Zam Zam camp for Internally Displaced People (IDP), North Darfur.
Thousands of people, mostly women, children and the elderly, have sought refuge in the Zam Zam IDP camp, following an armed militia attack on their villages more than three months ago. Many of the recently displaced hail from different villages around Tawila, Korma and Tina in North Darfur as well as Khor Abeche in South Darfur.
The displaced community continues to request for basic services such as water, food, healthcare services and shelter.
Photo by Albert Gonzalez Farran, UNAMID