Home » Photos » The bones of a camel in a dry river bed near Kalakol, Turkan...

The bones of a camel in a dry river bed near Kalakol, Turkana, Kenya 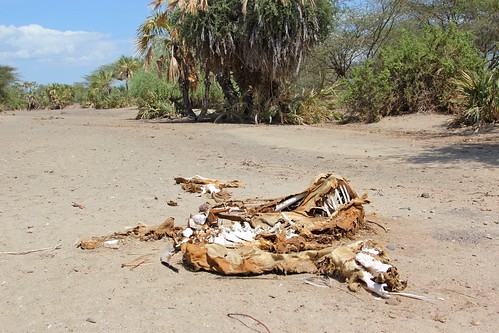 Credit: DFID, www.flickr.com/photos/dfid
The bones of a camel in a dry river bed near Kalakol, Turkana, Kenya.

Camels are a valuable commodity which are used for producing milk. Camels can produce milk despite not having water for long periods of time. Due to their value, camels are often stolen from people from neighbouring territories as they fetch a good price at market.

However, even camels need water sometimes. The lack of rain this year across the Horn of Africa has resulted in failed crops, lack of water and death of livestock. The Government of Kenya declared the drought a national disaster as 3.5 million people in the country are in need of emergency assistance.
Image credit: Marisol Grandon/Department for International Development

This image is posted under a Creative Commons - Attribution Licence, in accordance with the Open Government Licence. You are free to embed, download or otherwise re-use it, as long as you credit the source as 'Marisol Grandon/Department for International Development'.