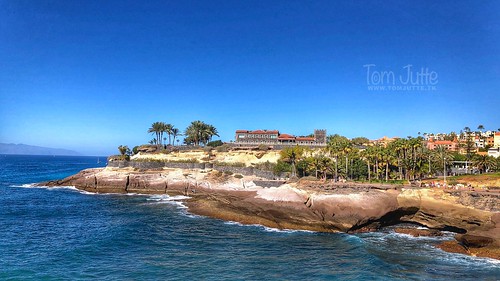 Casa del Duque is an imposing and stately structure located on the coast of Adeje on the island of Tenerife, Spain, that has already made many a heart go crazy and a head spin.

It was built in the early twentieth century (1931-1936) by the Duke of Abrantes (Duque de Abrantes). The place was called Morro del Bufadero and there the Casa del Duque was completely renovated and rebuilt as a residence on the old buttresses and the walls of the old castle. It was also in the immediate vicinity of the Casa Fuerte de Adeje that was inhabited by the Marquis van Adeje (Ponte family). This can be read in the information collected by D. Nelson Diaz Frias in his book "History of Adeje".
There you can also read that the domain was not with certainty the exile of King Alfonso XIII, the great grandfather of the current King Felipe VI of Spain.

Tourists and residents have been making their imagination work for some time; it has been mentioned for some time about the possible residents and owners who were connected to this castle-sized but also mysterious structure.
There are a lot of rumors about who still lived there or who owns or owned it.
Elvis Presley, Michael Jackson, Elton John, Liz Taylor, Richard Burton, Ron Atkinson, ... and even Juan Carlos, the king of Spain are the names that circulate on the internet as possible owners or (former) residents of the 'black castle' .
Or is it someone else?

Rafael Puig Lluvina, the realizer in 1966 of the urbanization with the name Playa de Las Americas, is, together with his son Santiago Puig, the owner of all project realizations that start with the name "Parque Santiago".
Don Rafael started an ambitious project with the prospecting of land at the end of 1965 and sought the necessary capital together to exploit the coastal area, located in Adeje and Arona.
There was nothing, nothing at all! No roads, no beaches, no electricity, no water supply, ... just wasteland and a salt pan. The beautiful and sunny weather that lasted a whole year was the boost to make his plan a success.
With great enthusiasm, patience and guts, he, pioneer and visionary, becomes the designer and promoter of the most touristy part of Tenerife; Playa de Las Americas.
The first urbanization was carried out on 3 million square meters on the site where the Gran Tinerfe hotel is now located.
Exactly within this urbanization the Puig family moved in, in their home called Casa del Duque.
The promoter Santiago Puig is married to the Tenerfian beauty Noelia Afonso Cabrera, who became Miss Europe in 1969, Miss Spain and 1970, and with whom he has two children.

The mystery has been removed, the speculations have been removed ... we can go to sleep again.