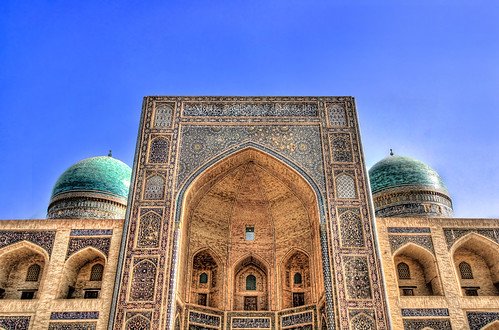 By the 1630s, sovereigns no longer erected splendid mausoleums for themselves and for their relatives. Khans of Shaibanid dynasty were standard-bearers of Koran traditions. The significance of religion was so great that even such a famed khan as Ubaidullah was buried next to his mentor in his madrasah. In the middle of the vault (gurhana) in Mir-i-Arab, Madrasah is situated in the wooden tomb of Ubaidullah-khan. At his head is wrapped in the moulds his mentor - Mir-i-Arab. Muhammad Kasim, mudarris (a senior teacher) of the madrasah (died in 1047 hijra) is also interred nearby.

The portal of Miri Arab Madrasah is situated on one axis with the portal of the Kalan Mosque. However, because of some lowering of the square to the east, it was necessary to raise the edifice of the madrasah on a platform.