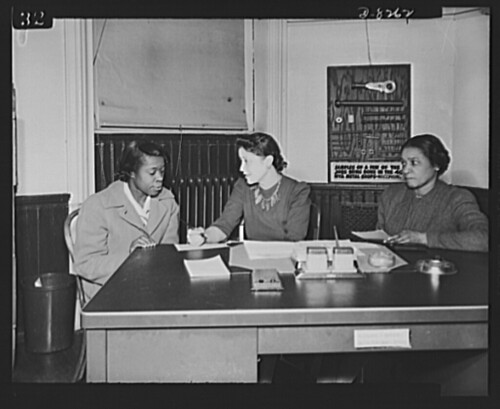 Juanita Gray is shown at the National Youth Administration War Production and Training Center in Washington, D.C. circa 1942.

Twenty year old Miss Juanita E. Gray of 226 59th Street NE, Washington, D.C. was working as a domestic when she heard about the local training center.

With uncertain earnings which sometimes drop as low as $4.50 a week, she decided to register for NYA training. Mrs. Lela M. Richmond and Mrs. Sadie M. Franklin enrolled her at the center.

After graduation she would go onto work at the Navy Yard, initially at $4.50 per day as a helper (5 times what she earned sometimes as a domestic) before moving into skilled work that paid $45 per week.

Washington, D.C. had “Rosies” at the Washington Navy Yard with influxes of women beginning in World War I, though they were nearly all in clerical or cleaning-type jobs. However in World War II, more than 3,000 women were hired at the gun factory into semi-skilled and skilled work with yet another wave during the Korean War of the early 1950s.

These included black women who were initially hired in the lowest grade jobs. However, during World War II, black women trained through the National Youth Administration were brought on into semi-skilled positions with a few moving up into skilled work such as machinist.

Most women left these jobs after each war, but some stayed on and made careers at the Naval Gun Factory (NGF)

The following are excerpts from History of the Washington Navy Yard Civilian Workforce: 1799-1962, by John G. Sharp that traces the history of women at the NGF:

During World War I (1917-1918), NGF expanded in size and ran twenty- four hours each day, seven days a week. Because of the acute wartime shortage of civilian workers, the Navy looked to women and created the Yeoman “F” (Female) rating.

This new rating allowed for the first time thousands of women to volunteer for the wartime service.

Secretary of the Navy Josephus Daniels, who created the Yeoman (F) rating, did so because it allowed the Navy to call up women specifically to relieve officers and men for sea duty, rather than as a substitute for male civilian employees who were serving in the armed forces.

This wartime experiment proved so successful that many women were kept on after the armistice as civilian employees.

Some like Nellie M. Stein and Ann Tapscott served as Yeoman (F) in the Naval Gun Factory for the duration of the war then immediately went to work as a civilian employee under the civil service as clerks in the same division. Tapscott later became a supervisor in the Accounting Department.

African –American women too began to enter the yard labor force during the war. Most of these new workers, such Mrs. Mabel Brown who began her 36 year career as a “Charwomen” (a title later changed to laborer), worked cleaning offices, laboratories and industrial spaces.

Their work was often hard and physically demanding, but the work was also steady and better compensated than most positions available to them in the private sector.

According to a memo in the Naval Records and Archives Administrations, Nellie Stein began her long federal career in 1912 as a Printers Assistant with the Government Printing Office. When war broke out, Stein volunteered for active duty as a Yeoman F and was stationed at the Naval Gun Factory.

After the Armistice, she was hired as “typewriter” at NGF. In 1932 Stein moved into the new Industrial Relations Division where she “constantly studied laws, directives, comptroller general decisions and books on personnel administration for 14 years.”

Stein and others like her often had to overcome a great deal of skepticism from her male supervisors and coworkers.

Here is one example of the challenges that Stein and other women faced in establishing a place for themselves in the Yard’s work force.

The memo stated, “Ordinarily the Personnel Officer would not recommend a Civil Service female employee to an administrative position. He would not so recommend women to be in complete charge of a division for he does not believe that women are emotionally equipped to meet the demands of such a position.”

Despite his considerable reservations, NGF’s Personnel Officer CDR. Davis did recommend Stein for the job and by the time of her retirement in 1948 Nellie Stein was NGF’s Assistant Personnel Officer (CAF-11), one of the highest graded positions at the factory.

By the 1920s, some factory organizations, such as the Accounting and Supply Departments, not only had large numbers of women but they in fact outnumbered men.

Women Ask for the Equal Pay

In 1919, the National Women’s Trade Union League asked Secretary of the Navy, Josephus Daniels, for the same pay as men working in the Yards.

The committee protested to the Secretary against rating women as seamstresses and flag makers in the Navy Yards at the pay of common laborers.

Sewing, the committee contented, was a skilled trade and none of the ratings for male skilled trades were as low. They also complained that seamstress and flag maker inspectors did not receive the same pay as men.

Despite this and other appeals, comparable pay did not become a reality for another four decades.

Women go to War at the Navy Yard and Gun Factory

WW II greatly expanded employment opportunities for women. While hundreds of thousands of men were being drafted into military service,
If vital war production was to continue, women were needed in the factories and offices.

In January 1943, Yard Commandant, Rear Admiral, Ferdinand L. Reichmuth invited the Washington press corps to tour the Yard. Here reporters from the two major papers could view first-hand the work that women were accomplishing at the Gun Factory and other locations.

This tour was the first time that the Yard had been opened to the press in over a year due to wartime security. Reporters were told there were now 1,400 female workers employed in ordnance manufacture. These new entrants ranged in age from 18 to 50.

They came from all walks of life having worked as housewives, dry-cleaners and laundry workers, beauticians, office workers, maids and one, Mrs. Arbutus Howlett, who was previously employed as a farmer.

The world of the female employee was not free of stereotyping and bias. Most of these women worked long hours and also frequently worked Saturday and Sunday.

Captain J. R. Palmer, Production Officer, reflected some of the views of
the time, when he described the ideal female employee: “She is between 25 and 35 years of age, single and without local family connections.”

“She is a person who has to earn a living and is endowed with a natural mechanical bent and a high degree of adaptability. In her work-a-day world relationships with men in the shops she does not expect the small gallantries a man shows a woman in a social relationship.”

Captain Palmer went on to relate to the reporters: “Women are doing the work usually done by apprentices and some had sufficient skill to work as machinist.”

One top ranking officer summed up the contribution that female employees were making to the workforce as:
“These women are doing a grand job to win the war and win it as quickly as possible. They step into men’s places at the machines and keep them turning without a stop as the men go off to the fighting fronts. Today’s women workers at the Washington Navy Yard produce an ever growing flow of ordnance material.”

The Star reported the biggest problem for the new female workers was finding childcare.

“Equal pay and promotions for women are one of the government standards of employment supported in writing by the Navy Department ....The Navy Yards themselves seem to be unaware of the fact; .... Navy Yard women start at $4.65 a day which with time and a half for the sixth day is $ 29.64 a week. Deduct the 20-percent withholding tax, and you find we luxuriate on $23 a week.”

“The highest pay women on production in our shop receive $6.95 a day, a peak she attained after two years of service at the yard. Men get as high as $22 a day.”

Many of the women working at the factory may have agreed with Mrs. Robert T. Withers, a milling machine operator in the Breech Mechanism Shop with over two years on the production line’s 4-12 shift: “I feel I am helping my husband and my country and keeping busy so that when this war is over I can be a housewife again.”

The Korean War meant a heighten demand for NGF to increase munitions production. This combined with the loss of skilled workers to the reserve call-up motivated NGF to begin a serious effort to hire female ordnance workers. Starting in late 1950 NGF hired hundreds of women.

All of the new workers were given a two-week indoctrination course. Each new employee was provided practical shop training and instruction in how to operate the various machines and tools, how to read blue prints, and the use of measuring instruments.

Some like Mary L. Johnson had previous experience at NGF during WWII and were keen to return. “I worked here once before during the last war and I know something about the work. I honestly feel the work I am doing is important.”

Irene Hunter also had worked three years for NGF in World War II. She welcomed a chance to return, saying, “when I was notified that the NGF was hiring women to work on machines again, I quit my job with the picture company and came here. The work that I do is very exciting and takes steady nerves. I believe had I the opportunity, I would like to work here permanently.”

Kathleen Siggman, who previously had been a model, an assistant buyer of women’s apparel and worked in a private sector machine shop, was enthusiastic: “this is the best job I ever had!”

Daphene Dyer, a war bride from England, related; “I was born in England and spent the last war driving ambulances. That is why I could not go back to office work. I feel that the work I am doing here is essential for my new country and naturally I am anxious to do a job.”

In 1961, the last production runs were completed, shops were dismantled and cleaned, and forges and boilers banked. Over $200 million dollars of equipment such as machine tools, industrial cranes and barges were disposed of primarily to other government agencies.

By the beginning of 1962, NGF workers, who epitomized the rich heritage of the nation’s trade and craft traditions and who had served their country well in the all the major wars of the 20th century, said quiet goodbyes to their friends and shop mates.

Photo by Roger Smith. The image is an Office of War Information photograph courtesy of the Library of Congress. It was published in January 1943.