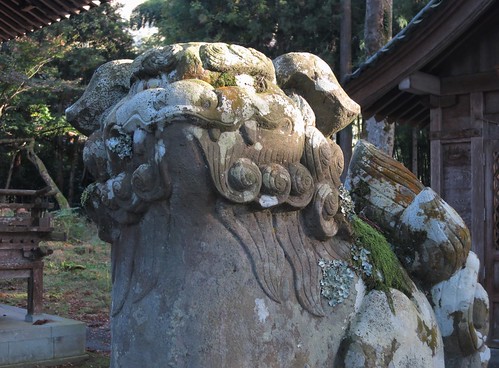 Owing to the many centuries of overlapping religious tradition between native Shinto and Indian (via China and Korea) Buddhism, there was some blurring of functions and beliefs. According to wikipedia's overview to the subject, Shinto originally was rather a fluid and provisional thing - where numinous response arose, there was a worthy place of worshiping. But as the generations followed, some of the Buddhist elements came into Shrines, such as variations on the imported carpentry and engineering of metal and wood and tile to create all-weather structures in fixed locations. The guardian 'lion-dogs' came to echo the guardian demons at some Buddhist temples with one of the pair with mouth sealed ('un' or token of death) and one of the pair with mouth open ('ah' or token of birth); the equivalent of "alpha and omega" (life and death, inclusive life cycle). Some shrines have the guardian lion-dogs positioned "alpha and omega" and others reverse it, depending if you read the display from the left or from the right.
See full-image view by pressing 'z' or clicking the image; screen-fill by pressing 'L'.