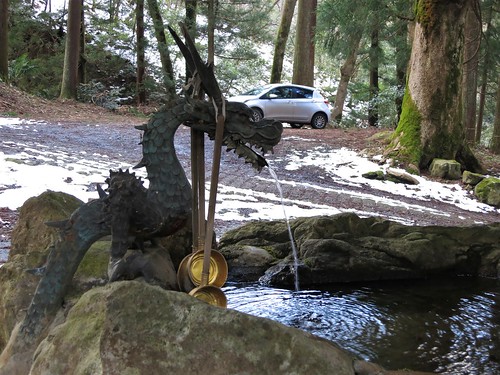 At first glance there seems to be a clash of ancient and modern, but the old assumptions and hopes pass from one generation to the next, forming an ongoing and living tradition that is not out of place among electronic devices and personal transportation systems. And, following the investigations published by Terrence Ranger and others (1983, The Invention of Tradition), looking into the backstory of this scaly beast on the edge of the rocky trough, probably something less than ancient would emerge: maybe a national competition concluding with this design which came to be mass produced for shrines near and far, up and down the islands. So while some generations psychologically distance the date that this car rolled off its assembly line and the time that this scaly artistry was installed, both artifacts occupy the present age; not juxtaposing disconnected historical periods, but rather fusing all into a whole for today's Japanese. Traditional and modern together form a unified fabric for society
See full-image view by pressing 'z' or clicking the image; screen-fill by pressing 'L'.