Another pretty vendor- she sold me shorts for home wear 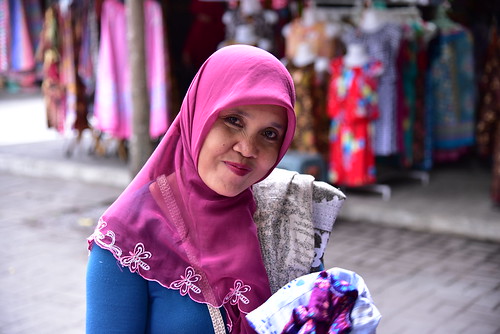 Here is another pretty vendor- so pretty despite the head scarf covering part of her head! She sold me shorts for home wear. Now this is something I'd experienced in Hoi An, Vietnam, and was experiencing here in Borobodur in Indonesia- pesky vendors trying to sell you stuff as you are eating. I had again made the mistake of sitting at one of the outer tables in the cafe where we had lunch when this rather pretty vendor passed by, offering me shorts. Well, I needed shorts for home wear, the ones available in Dubai were not up to scratch, and the ones she was offering were just perfect in terms of softness and price. I bought four- she actually went elsewhere to get one or two more. Purchasing done and meal eaten, and after taking a picture of the pretty vendor, this is when I achieved a sort of VIP status. Seeing me a willing customer, half a dozen ladies descended on me urging me to buy something from them as well. Yes, competition is fierce here! They chased me all the way to the car, and I was telling my driver guide, aley aley (the local lingo for hurry, hurry). Now that caused much amusement among the ladies, and they all started laughing and saying aley, aley as well! There was finally a farewell committee of about five local ladies, so to speak, who eventually gave up trying to cajole me into buying as they were too busy laughing as they followed me up to the car! They ended up wishing me good bye and calling after me, aley aley, much to everyone's amusement. Such friendly folk, these Indonesians! (Y/Jogjakarta, Indonesia, May 2018)