Home » Photos » Hammond. Ghost town of the Willochra Plains. The ruins of Wi...

Hammond. Ghost town of the Willochra Plains. The ruins of William Hudson's house and fireplace. He was the first Post Master and then grain buyer in the 19th century town. 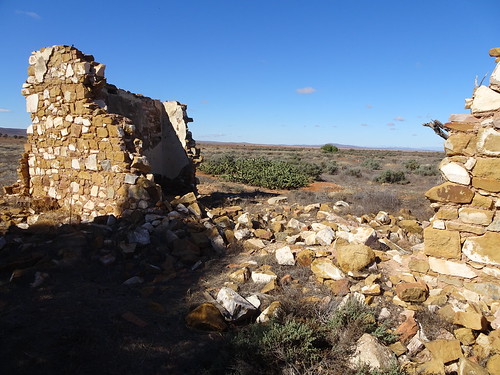 Hammond (also known as Heartbreak Plains.)
Hammond is a classic tale of a town established way beyond Goyder’s Line during the good seasons of the late 1870s and then its decline into a ghost town with perhaps only a hand full of permanent residents. Parts of Coonatto station were resumed by the government and the land surveyed and then sold at auction for farming from 1875 to form the Hundred of Coonatto. The town of Hammond was surveyed and established three years later in 1879 and named after one of Governor Jervois’ children Hammond( after William Hammond Wilmington Jervois) as was Amyton ( after Amy), Johnburg ( after John), Carrieton ( after Carrie) and also Wilmington. Hammond’s establishment was exceedingly fast and its decline exceedingly slow and painful. With the initial survey around 120 town allotment were offered for sale. A year later (1880) Hammond extension created more town blocks with two street blocks of around 60 town allotments near the new railway station making a total of nearly 200 town allotments. The railway line from Petersburg on its way to Quorn reached Hammond in late 1880 with the first through trains to Quorn in December 1881. The railway was crucial to Hammond’s growth and in 1889, for example, 200,000 bags of wheat were railed out of Hammond. Farmers carted their wheat in drays from Willowie, Amyton and Wilmington to the railway in Hammond.

The origins of the town go back to a time just before the 1879 survey. The Hammond Hotel was built and licensed from 1877. Jacka brothers who ran the brewery in Melrose opened the hotel with beer carted from their brewery. The hotel closed in 1972. Another early structure was the town Post Office built in 1880 with William Hudson as the first Post Master. Hudson appears to have soon given this up for the far more lucrative business of being a wheat agent/buyer. He was one of three main wheat buyers in Hammond throughout the 1880s and 1890s. The Police Station was another early structure as was the state school which opened in 1885 - as a provisional school. The fine stone building which still stands was built around 1895 when Hammond was no longer a provisional school. (For a few years Hammond also had a Catholic School.) Hammond School closed in 1969 with just 6 pupils. In its early years it had over 50 pupils a year. In its heyday Hammond had three stone churches. The first was the Wesleyan Methodist built in 1884. It closed in 1955 and was demolished. St Andrew’s Anglican Church began services in the Institute in 1884 and the church opened a few years later in 1892. It was recognised by the Anglican Synod in 1897. It closed in 1954. The Catholics held some early services in the Institute until their church was moved stone by stone and brick by bricks from near Wilmington to Hammond. In July 1907 Bishop Norton of Port Augusta diocese opened the church. In 1964 a later Bishop of Willochra was ordained in this church and the celebration event held afterwards in the Hammond Hall. Alas neither the church nor Institute are community buildings these days. The Hammond Catholic Church however was the last public building to close in Hammond and that only happened in 2006. In the early years Mrs Jacka’s Assembly rooms in the Hammond Hotel were used for public meetings and even church services. The Institute Hall was opened in 1884 in rented premises until their own building officially opened in April 1893. A Soldiers Memorial façade was added in 1922. A cottage hospital operated in Hammond from the early years as the town had a resident female doctor. The only other public facility that Hammond needed was a District Council and that was formed in 1893 and met in the newly opened Institute. The Council Offices were built behind the hotel in 1913. Hammond District Council was disbanded and amalgamated in 1933. By the late 1890s Hammond had over 100 residents (with about 600 in the Council District) and it was a thriving town despite the droughts of the early 1880s and early 1890s and the unsuitability of much of the country for farming. The community persisted despite the odds and Heartbreak Plains was an apt name but the community was far from dead.

Business was thriving in Hammond in the 1890s and it is doubtful that anyone then thought this thriving town would be a ghost town in the next century. Hammond had the hotel, two butcher shops, two saddlers, two boarding houses, two bootmakers, three general stores that employed over 20 people between them, a butter factory, three grain buyers, a blacksmith who made agricultural implements and buggies and employed 30 men, and to handle this business there was a Bank of Adelaide which opened in 1883. Growth continued into the 20th century and in the 1911 census Hammond had its greatest population with 319 residents but this fell to 109 in 1933 and only 68 in 1947. The number of occupied dwellings fell from 61 in 1911 to 10 in 1961. The rural population surrounding Hammond fell from 94 in 1933 to just 11 in 1947. The town had lost its rural hinterland and economic base.

How then did Hammond become a ghost town? Hammond died very slowly. It began with the closure of the Catholic School in the early 20th century and a big decline in population in the early 1900s. The Police Station was closed by 1904 and the Post Office became a non-official Post Office in 1917 with no mail services at all after 1988. Hammond blacksmith business was sold and presumably closed in 1912. About two third of the population left the town during the 1920s. Another major period of decline was the 1960s. The Railway Station was downgraded to an unattended station in 1930 and from 1937 the Transcontinental Train to Perth no longer passed through the town and the rail service was quite limited. In 1933 the District Council was abolished and the Offices closed. The bank of Adelaide closed in 1939. During World War Two it was used as the office for issuing ration books and as a polling booth for federal elections. Then the churches began to close. The Anglican Church closed in 1954 followed by the Methodist Church the next year. The last general store was still operating when the churches closed but it probably closed when the school and hotel closed. Enrolments at the school began a decline from 1914 onwards with the biggest falls in student numbers from 1942 and by the early 1950s the school usually had around 12 enrolments. The school closed in 1969. Just three years later the hotel closed and the town was almost dead. The last passenger trains used the railway station and line in 1969. Goods trains ceased in 1987.Then in 1999 the District Council of Mt Remarkable sold off properties and buildings that had been abandoned by their owners. Some were purchased for use as weekenders but by then most property had already been demolished or was beyond repair. The noted artist Charles Bannon, father of Premier John Bannon had a property in Hammond for many years and Charles Bannon is buried in the Hammond cemetery.