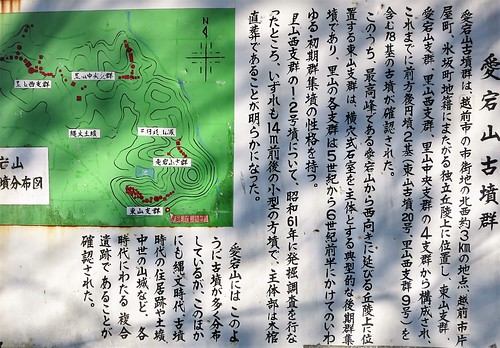 The text describes the mountain (east end is Atago-san, west end is Sato-yama). The map orientation shows "N" for north and red icons of the multiple burials on the topographic high ground. A few of the icons are larger than the others; one or two have a remarkable shape - not oval but have a circular or keyhole shape. It would be interesting to know the socio-economic conditions that resulted in these labor-intensive, high-value burials: who (status ranks) was interred, who was not (in which case where to dispose of remains), and at the threshold (borderline status) what determined if a mound burial would be built or not.

Looking through the time-traveler telescope from the opposite end, taking the standpoint of those long-ago people, whatever might they make of our curiosity and investigations of their dearly departed relatives, community leaders, or power/status holders? The fact that the mounds have faithfully preserved a little of those times across the millennia might be one surprise to the long-ago people, and the wonders of modern living, including the massive disturbance of the environment would stagger their imaginations, very probably. Almost all flat land and upland has been churned into agricultural service, the hard surfaced roads and the giant population with high literacy and mobility and longevity now dominates the country.
See full-image view by pressing 'z' or clicking the image; screen-fill by pressing 'L'.