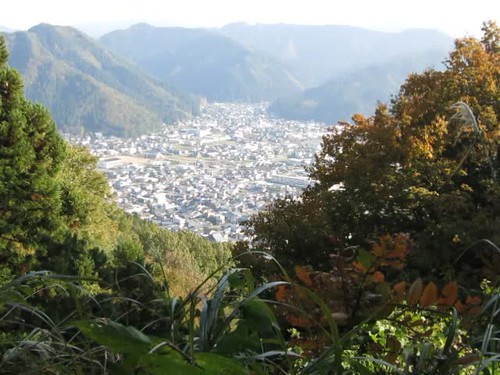 The climb from Okafuto-jinja in Awatabe includes this view and a bench to rest on. It is more than 1/2 way to the top ridge
that leads to the remains of medieval mountaintop castle site. According to the interpretive sign at the site, this was the biggest structure among the surrounding mountaintop castles of the time (yama jiro), partly due to geography, midway between Soma-yama castle to the south and the town developed around the Asakura estate to the north in the valley of Ichijo-dani. Today there is the convenience of modern footwear and the trail improvement with steps reinforced to protect against erosion and slipping. But 500 or 600 years ago the passage up to the ridge line with food, water, messages and so on must have been difficult in all but fine summer and full sunlight. On the other hand, the concept for mountaintop strong point was as a last resort, not as a place for day to day living. So there would usually not be too much traffic when battles were not going. The flatland castles created after national pacification in the 260 years of the Edo period were functionally defensive, but mostly they were well-furnished places of society, fashion, learning and arts in contrast to the medieval mountaintop structures.