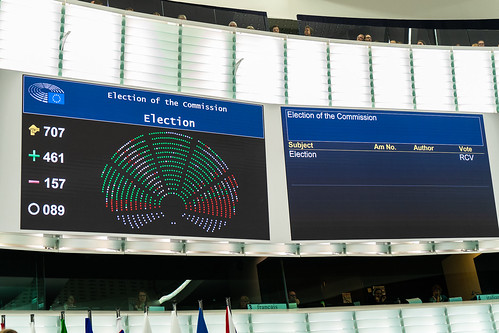 The plenary vote on Wednesday would bring to an end the long process of careful examination by Parliament of the proposed team of commissioners. Its objective was to ensure that the EU’s executive body has the democratic legitimacy to act in the interest of Europeans.

MEPs elected Ursula von der Leyen as Commission president in July. Then, from the end of September to mid-November, parliamentary committees organised hearings with each of the nominees to judge their suitability for their proposed post.

On 21 November political group leaders and Parliament’s president Sassoli agreed that the process of examination had been completed and that Parliament is ready to hold the final plenary vote.

On Wednesday 27 November, President-elect Ursula von der Leyen will present her team and the new Commission’s programme. Following a debate, MEPs will decide by simple majority whether to elect the Commission or not.

If approved, the new Commission will start work on 1 December.


This photo is free to use under Creative Commons license CC-BY-4.0 and must be credited: "CC-BY-4.0: © European Union 2019 – Source: EP". (creativecommons.org/licenses/by/4.0/) No model release form if applicable. For bigger HR files please contact: webcom-flickr(AT)europarl.europa.eu