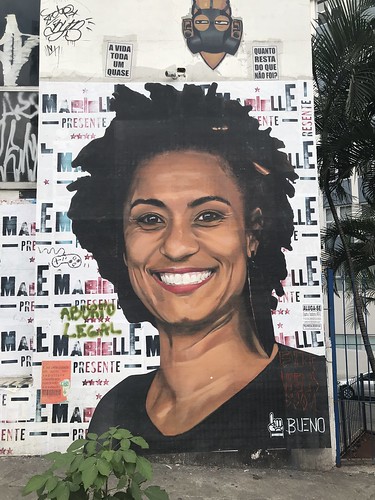 Tribute to Marielle Franco from artist Luis Bueno in the central region of São Paulo.

The shooting of a black, gay councillor has dealt a new blow to communities oppressed by gangs

The morning after tens of thousands of people thronged streets across Brazil to express their anger over the murder of black, gay Rio councillor Marielle Franco, it was business as usual in the Maré favela where she grew up. Armed drug gang members openly patrolled behind a police base.

Franco’s death last week at 38 – a carefully targeted shooting by apparently professional killers – sent shockwaves across the world and is forcing Brazilians to ask searching questions about their country’s inherent racism, violence and culture of impunity. European parliament deputies condemned the killing. Brazil’s prosecutor general, Raquel Dodge, called it an attack on democracy. The great Brazilian music star Caetano Veloso wrote a song for her.

Franco fought for the rights of women, single mothers like herself, gay people and favela residents. She denounced the violence inflicted by Rio’s police on the community as they fight – and occasionally collude – with the drug gangs and another force active on the streets: the unofficial militias whose members include serving and former police officers.

In Rio state 154 people were killed “in opposition to police intervention” in January alone, 57% up year-on-year. Many think this is the reason Franco and her driver, Anderson Gomes, were riddled with bullets last Wednesday night – and fear the killing will discourage others like her.

“She knew what she was doing for us,” said Sonia Vieira, 64, a Maré pensioner who had voted for Franco. “Whenever someone comes along who can do this, they get rid of them.”

Suspected to be in Marielle's murderer's car arrested in Rio yesterdey.

Rio de Janeiro has no idea who killed her and him.
Brazilian Federal Police offered help, but Rio de Janeiro State did NOT accept. August 23rd., 2018.