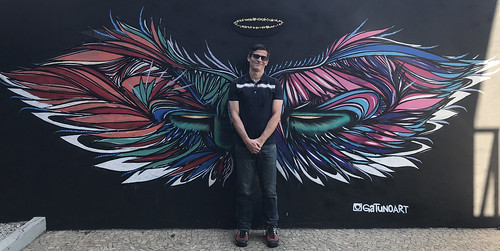 I'm an angel and I can prove it.

From the corner of Batman's Alley on Harmonia Street, a wall is attracting fans of graffiti and self-effacing: the "Angel of the Village," a colorful pair of wings occupying a wall of the Kotton Futons store at number 150, is turning a scenario known by the neighborhood.

Mauricio Tribug, owner of the store and the idea of ​​bringing the '' angel '' to the wall

Mauricio found the graffiti artist Celso Campos, the Gatuno. In one day, more exactly in less than 4 hours, the wing was ready. "In the end, the wall was better than the sketch!" Says Mauricio, who made a point of choosing the colors of the drawing.

"Commercially, it did not change much for the store, but it does. It was more lively here, the people that come to take the picture go into the store to get to know it too. What I liked the most was that the idea worked, and that people show up," .

Between selfies and poses with wings, professional photographers have already passed Kotton's wall, part of the Danish delegation (which remained in São Paulo before moving on to Rio 2016) and has even been the scene of a marriage proposal.