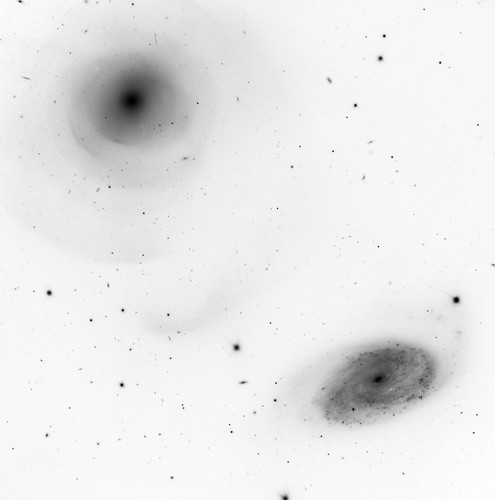 Original caption: Compared to their more intricate spiral cousins, elliptical galaxies resemble soft, hazy clouds. These galaxies have smooth, undefined boundaries, and bright cores surrounded by a fuzzy, diffuse glow. However, looks can be deceiving. At least 10% of ellipticals extend much further out into the cosmos than you might expect, and possess a range of far finer structures than first meets the eye — features such as loops and shells. Located around 100 million light-years away in the constellation of Pisces (The Fish), the galaxy to the upper-left of this image is named NGC 474. It is a stunning example of a shell elliptical galaxy; enormous wispy tails flick around the galaxy’s main body, while the inner structure is formed of a series of nested concentric rings. In fact, the full extent of the galaxy cannot even be contained in this field of view. The tendril-like outer regions of NGC 474 billow and wisp away like smoke, extending outwards for large distances from the galaxy’s main bulk. Astronomers are unsure why some galaxies take on this kind of appearance and structure, but they believe it concerns gravity — namely, how nearby galaxies gravitationally interact with one another. It is possible that the spiral galaxy to the lower-right, NGC 470, has been tugging on its larger friend for billions of years, causing density waves to reshape its structure. This galaxy was observed as part of the ESO Cosmic Gems programme, an outreach initiative to produce images of interesting, intriguing or visually attractive objects using ESO telescopes for the purposes of education and public outreach. The programme makes use of telescope time that cannot be used for science observations. All data collected may also be suitable for scientific purposes, and are made available to astronomers through ESO’s science archive.