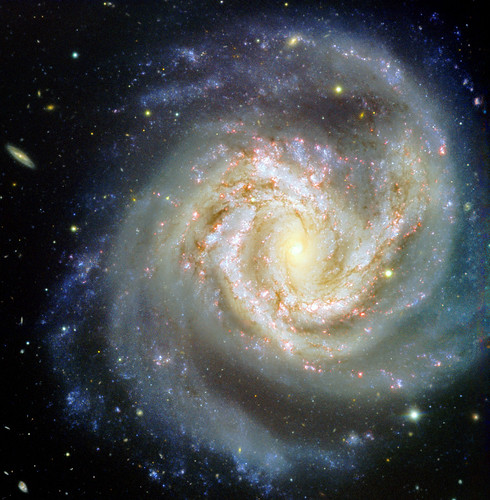 Original caption: Nuzzled in the chest of the constellation Virgo (the Virgin) lies a beautiful cosmic gem — the galaxy Messier 61. This glittering spiral galaxy is aligned face-on towards Earth, thus presenting us with a breathtaking view of its structure. The gas and dust of the intricate spiral arms are studded with billions of stars. This galaxy is a bustling hub of activity with a rapid rate of star formation, and both a massive nuclear star cluster and a supermassive black hole buried at its heart. Messier 61 is one of the largest members of the Virgo Cluster, which is made up of more than a thousand galaxies, and is itself at the centre of the Virgo Supercluster — to which our Milky Way also belongs. This dazzling beauty was first discovered in 1779, and it has been capturing astronomers’ interest ever since. Set against a dark sky littered with galaxies, this image shows the awe-inspiring M61 in its full glory — even at its distance of over 50 million light-years. This image was taken as part of ESO’s Cosmic Gems Programme, an outreach initiative to produce images of interesting, intriguing or visually attractive objects using ESO telescopes, for the purposes of education and public outreach. The programme makes use of telescope time that cannot be used for science observations. In case the data collected could be useful for future scientific purposes, these observations are saved and made available to astronomers through ESO’s Science Archive.