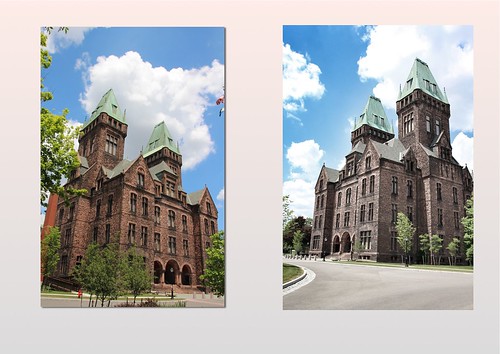 The Richardson Olmsted Campus in Buffalo, New York, United States was designated a National Historic Landmark in 1986.[2][3] The site was designed by the American architect, Henry Hobson Richardson, in concert with the famed landscape team of Frederick Law Olmsted and Calvert Vaux in the late 1800s, incorporating a system of enlightened treatment for people with mental illness developed by Dr. Thomas Story Kirkbride. Over the years, as mental health treatment changed and resources were diverted, the buildings and grounds began a slow deterioration. In 2006, the Richardson Center Corporation was formed to restore the buildings.

Today, the Richardson Olmsted Campus is being converted, beginning with the now open Hotel Henry Urban Resort Conference Center and 100 Acres: The Kitchens at Hotel Henry, both within the Towers Building and two flanking buildings (about one-third of the Campus). Arriving in 2018, the Richardson Olmsted Campus will also house the Lipsey Architecture Center of Buffalo. The remaining buildings have been stabilized pending future opportunities.116