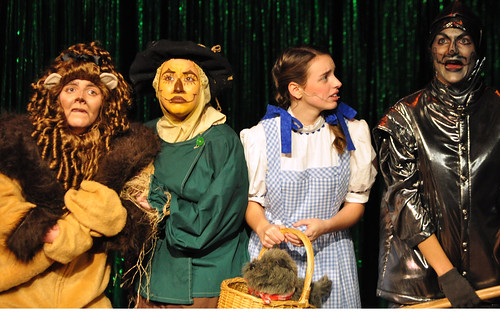 Baum’s Strong Women
For the past 104 years, people saw what they wanted to in the Wizard of Oz. In the fifties, conservatives in the government pointed an accusing finger at L. Frank Baum, its author, insisting that Oz is a communistic society lacking money, where all comrades work for the common good. At times religious groups saw the book as demonic, pointing out that Baum pictured witches as nothing more than smart women: some good, some bad. Economists saw the story as a march to the gold standard with “oz” standing for ounces of gold, the green of Oz as the color of money, and the brick road as an “obvious” reference to the yellow metal. Others insisted that the story was a political tract with the lion representing England. In fact, the emerald green of Oz may be a reference to Baum’s ancestral home of Ireland. Yellow brick was a common building material in 1900. The name “oz,” according to one of Baum’s sons, was inspired by a filing cabinet in Baum’s office. The files were listed alphabetically with the last one labeled, “O - Z”
Frank Baum insists in the introduction to The Wonderful Wizard of Oz, published in 1900, that “old time fairy tales” contain a “fearsome moral to each tale.” He would have nothing to do with placing a moral in his stories. Baum insists the story “was written solely to pleasure children of today.”
With that said, and in spite of what the author insists, there is a wealth of metaphor and meaning in his works. Perhaps the most consistent theme that runs through most of his many books is the message that girls may strive to be strong women. In ten of his fourteen books, the hero is a girl or woman. True power in Oz, both good and evil resides in woman. Dorothy, a little girl in the original story, leads (practically drags) her three adult male friends through a life’s journey, helping them find themselves. They discover that they always had the courage, kindness, and intellect that they mistakenly thought they lacked. Oz himself is a fraud.
Baum was an ardent advocate of woman’s rights. As a newspaper correspondent, he wrote numerous articles on the topic. He campaigned vigorously with his wife, mother-in-law, and Susan B. Anthony to win the vote for women in the new state of South Dakota. The vote was lost but his strong feelings for the equality of women continued to be expressed in his stories and papers.